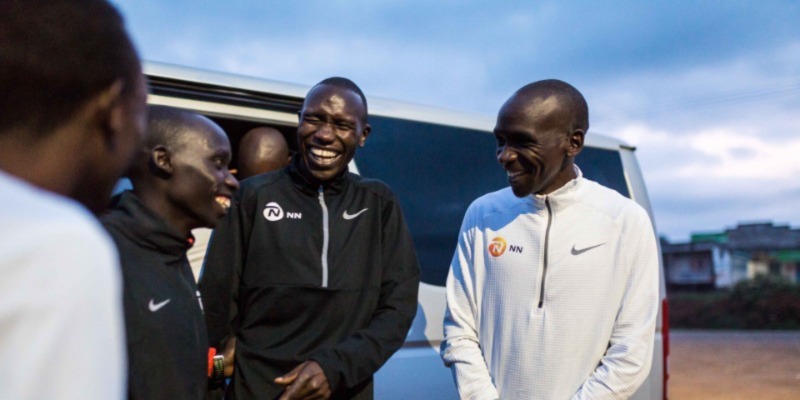 Justin Lagat wrote this interview after a brief chat while on a run in Eldoret, Kenya, and meeting up with Coach Patrick Sang.

The man or woman who came up with the catchphrase, easy like a Sunday morning, probably said so just after returning from an easy run on a Sunday morning in Eldoret, the city of champions in Kenya.

Today, the 11th of December 2022, the early morning atmosphere smelled nice and fresh, with the rains returning after a while and settling down the dust on the dirt roads here. It was a few minutes to 7 AM as I went out for my morning run. The roads were empty, as expected on Sunday mornings. I heard a car approaching from behind and moved to the side of the road without turning my head to look as it came and sped past.

Then, to ensure it was safe before returning to the road, I glanced back and, from the corner of my eye, thought I saw a speeding motorcycle. I looked again more clearly and noticed it was none other than the world-renowned coach, Patrick Sang, rapidly closing the gap on me. Not that it helped since he would have closed the gap; nonetheless, I slowed down a little for him to catch up faster. Obviously, he is a faster runner than me, given his daily interaction with and watching Eliud Kipchoge – the greatest of all time- train almost daily. Besides that, he also knows firsthand that no human is limited.

We briefly exchanged greetings after he caught up with me. Then, the topic quickly shifted to the national cross-country championships that happened the previous day at the Kenya Prison Service training College in Ruiru.

Sang was happy for his athlete, Geoffrey Kamworor having just qualified to make the team despite just coming back from a long break from running after suffering an injury from a motorcycle accident sometime in June 2020.

According to him, the journey back to fitness for the two times former World Cross Country Champion has been slow and gradual. Finally, however, Kamworor began some serious training just a few weeks ago.

“The fact that he could make the team with the little training he had done is great news. We were in a hurry for him to get back into competitive running ahead of the Olympics last time. But unfortunately, while we kept monitoring the knee that had suffered the impact from the motorcycle accident, the injury shifted to the other leg as he would shift his weight on one leg involuntarily to naturally support the injured leg before it could heal fully,”…