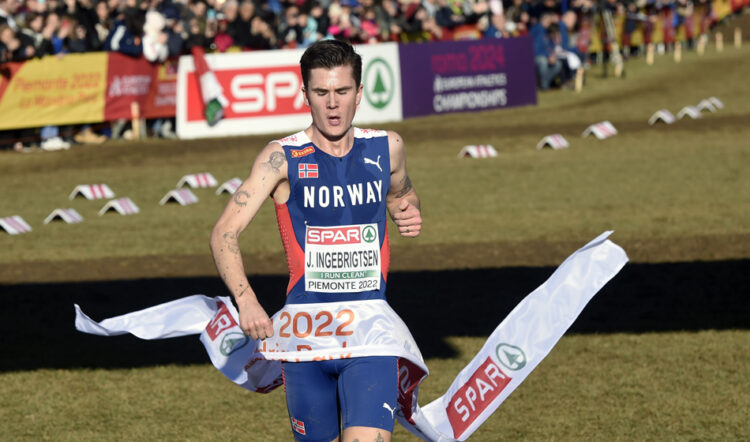 Olympic champion wins again ahead of an inspired Emile Cairess, as Karoline Grøvdal makes it a great day for Norway with a successful defence of her senior women’s crown

On a crisp morning at the European Cross Country Championships on the outskirts on Turin on Sunday (Dec 11) the message was clear as Jakob Ingebrigtsen strode to victory in the senior men’s race. The Norwegian is wintering well as he prepares for next summer’s track season.

This was his sixth successive gold medal at these championships after four under-20 victories and, now, two senior wins. Striding away almost effortlessly on the final climb on the last lap, he won by nine seconds in 29:33.

Behind, Emile Cairess of Britain put up a fantastic challenge to take silver with the race of his life so far. Bronze went to Isaac Kimeli of Belgium with the big host nation hope, Yeman Crippa, not quite able to get on terms with the leading trio as he settled for fourth place just ahead of Filimon Abraham of Germany.

Ingebrigtsen even had time to do a little show-boating on the final lap, which included a cheeky thumbs up to a camera in the short indoor section soon after he’d established his winning lead. When asked if he knew anything about his nearest challenger, Cairess, he answered with a blunt “no” as well.

But the 22-year-old added: “Today was a good field with the best in Europe and it’s never easy.”

He says he set off steadily and explained: “Most people went out too hard. From watching the junior races a lot of people faded and hit the Wall.”

Also setting off steadily was Cairess who, at one point, was sitting behind all of his GB team-mates in the race but later on led the field, including Ingebrigtsen. “I set off well slow,” the Yorkshireman added. “Last time at this event I blew up (60th in 2019) and so I wanted to make sure I finished well this time. I knew it’d be a tough course so I didn’t want to cross over that red line. I know when you go over it it’s hard to go back.”

Cairess added: “I felt strong in the middle. Incredible, unbelievable. But the last lap I didn’t feel good! Maybe I’ll never get to his (Ingebrigtsen’s) level of winning the Olympics but I have big aspirations and am improving every year.”

Was his silver medal a surprise? “I was looking for a medal but I thought Ingebrigtsen and Crippa would be a class apart. I thought a bronze might be on the cards if everything went perfectly…