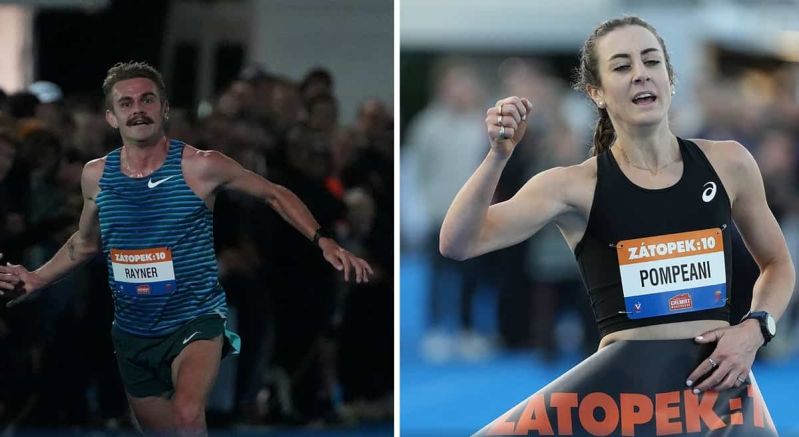 Leanne Pompeani and Jack Rayner won Australian 10,000m champions at the 62nd edition of Zatopek:10 on Thursday night. Amy Bunnage clocked a new Australian Under 18 record in the 3000m.

“This is my first open national title and it feels good to do that at Zatopek at a big event,” Pompeani said. “It’s one I’ll remember. I wasn’t planning on taking the lead that early but things just happen and it’s got to be someone so I thought why not give it a try.”

After a relatively slow first half of the race, Pompeani surged in the lead with 10 laps remaining, with Olympians Rose Davies (NSW, Scott Westcott) and Izzi Batt-Doyle (SA, Nic Bideau) chasing. Eventually, the defending champion,Davies, and Batt-Doyle could not keep up with the race leader as Pompeani powered home to the most significant victory of her career.

“It’s definitely a lot of pressure (running with Davies). I know she’s been training so well, so I didn’t know what she would do tonight but it did feel like she was biding her time. She probably has more of a kick than me so I knew I just had to keep this pace honest,” she said.

“I always love Zatopek. I’ve missed out on a couple of years due to injuries but I think that was my seventh time doing it. I’ve grown up doing it since I was 18 or 19 but I’ve gotten better each year, some years not so good, but it’s nice to get my stride going now,” Rayner said.

“It’s been my best year without a doubt. I’ve run PB’s and two Australian records. I’m over the moon and hopefully I can keep the ball rolling next year into World Cross Country and World Champs,” Rayner said.

I knew I had never reached my potential on the track but it didn’t always translate to racing,” he added.