Katie Nageotte, some thoughts on Katie winning the Olympics and World Champs… 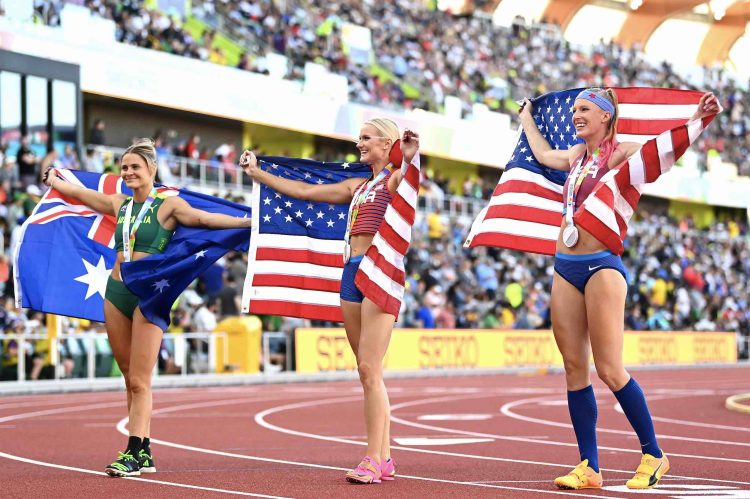 This is part two of Stuart Weir’s feature on Olympic and WC gold medalist Katie Nageotte. Katie spoke honestly with Stuart on her challenging season and just how much it has meant. This is the 204th story of 205 pieces by Stuart in 2022, and we thank him for his incredible writing for RunBlogRun.

Olympic Champion pole-vaulter had quite a journey to reach the 2022 World Championships (see the previous article) but it all came good when she arrived. And to make it even better, it was a home championship.

“It was awesome.  I think it was exactly what I needed from where I had been all year.  The fact that my family, fiancé, and friends were all there helped.  Also, I felt more laid back, which was what I needed.  It still felt very important, but the fact that I could go out to dinner with my family and see them calmed me.  I am somebody who likes to hang out with my people.  It helped me to get the balance between it being a really big event and helping me to stay relaxed”.

Despite the disappointing crowds, “it still felt awesome.  When I was on the runway, I could hear people – and not just my family members – cheering for me.  People I didn’t know who were genuinely rooting for me in a way that I’d never gotten at a Diamond League or championship”.

With regard to the disappointing attendance, Katie puts it down to the cost of travel across the USA and the fact that track and field in America isn’t quite what it is in Europe in terms of popularity.

One vault was all that Katie needed to reach the final.  In the final, she cleared 4.45 and 4.60 at the first attempt and 4.70 and 4.80 each at the second attempt. Katie, Nina Kennedy, and Sandi Morris were the only three to clear 4.80, so they were the medallists, but Sandi Morris was the only one with a perfect record. It all came down to the 4.85 bar, and Katie cleared it with her first attempt, Morris needed two goes, and Kennedy failed. The Olympic champion had become the World champion.

“Everything we have done in the past 4-5 years with my coach, Brad, gave me the foundation that I needed.  I know that I won’t ever get away with it again because I wouldn’t be so lucky next time.  I knew that part of that meet would be competing for my way into shape and confidence because I…