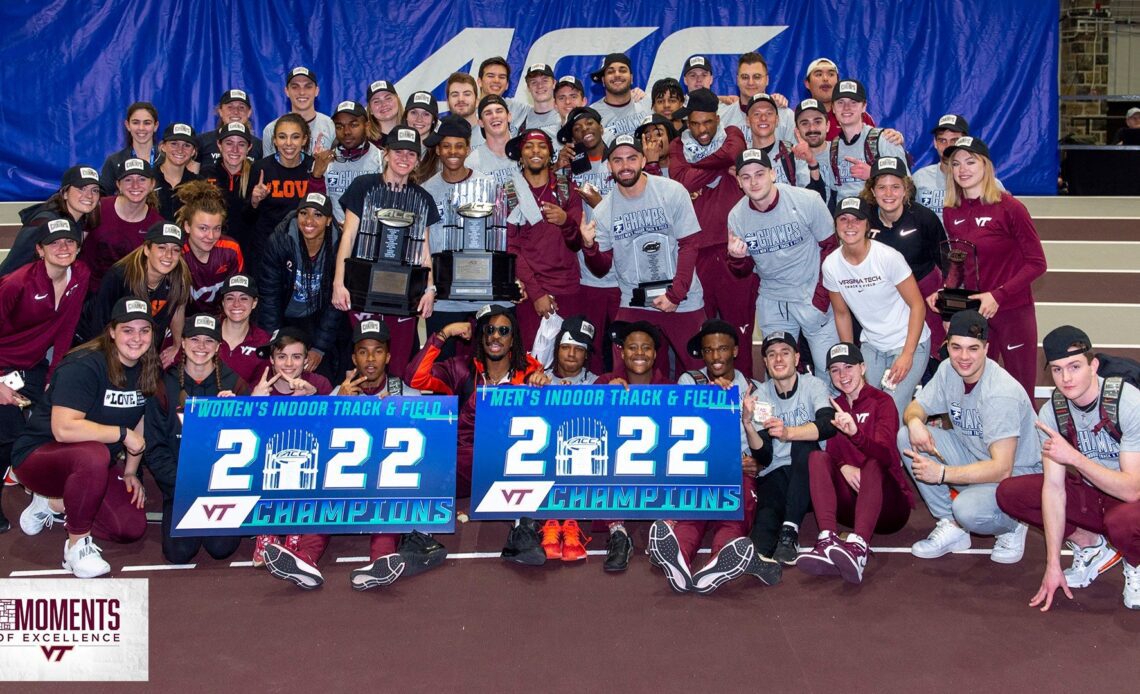 As the 2022 calendar year comes to a close, Virginia Tech Athletics will spend the month of December celebrating the Hokies’ standout achievements from the past 12 months in a campaign called “Moments of Excellence.”

The “Moments of Excellence” campaign will serve as a look back to the historic highlights and memorable accomplishments in Tech Athletics during 2022. Each varsity sport program will have an outstanding moment featured during December on the official Virginia Tech Athletics website and @HokieSports social media properties. Fans can visit the Hokies’ social media directory to stay in contact with Tech Athletics and their favorite sports teams.

Virginia Tech men’s and women’s track and field teams claimed two ACC titles at the 2022 ACC Indoor Championships in Rector Field House. The Hokies historical win marked the first time in ACC history that the host school has won both the men’s and women’s championships.  The men’s team claimed their second consecutive indoor title, serving as the men’s indoor track and field Moment of Excellence.

Recap: Track and Field | 2/28/2022 11:05:00 AM
BLAKCSBURG – Virginia Tech track & field swept the 2022 ACC Indoor Championships this weekend, as the men’s team picked up a second-straight title and the women’s team were crowned co-champions of the conference to earn the Hokies their 18th and 19th ACC championships.


“Every championship is special, they’re all different, and for this crew and all the new faces to come here and buy into our philosophy and vision really says a lot about the coaching staff and the type of student athletes that we attract,” Director of Track & Field and Cross Country Dave Cianelli said. “The conference is getting better every year and the quality is so good now, to win a championship like this is really difficult, so I want them to really enjoy this.”

The Hokies’ double title-winning performance in Rector Field House marks the first time in ACC history that a host school has won both the men’s and women’s championships, indoors or outdoors. As the men’s team claimed their second consecutive indoor title with 105 points, they have now won four of the last six ACC Indoor Championships and seven of the last 12. The women’s squad have now won 2 of the last 3 indoor titles as they picked up their…