Putting a spring in your step 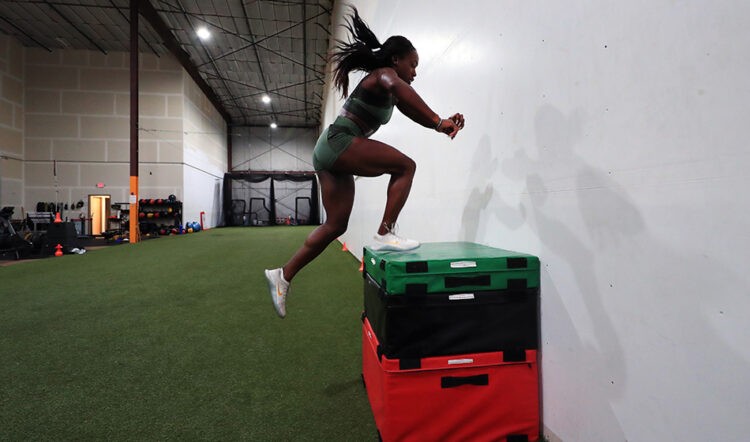 Plyometric exercises can benefit all athletes, but how do you pick the best ones for you and what’s the science behind them?

Plyometric drills such as drop jumps, hops and bounds capitalise on the stretch-reflex capacity of our muscles and other soft tissue.

When an athlete lands from a jump and prepares to leap back upwards or forwards, the muscles of the ankle, knee and hip will perform what’s known as an eccentric muscular lengthening action. They then shorten whilst performing the reactive concentric muscular action to power the athlete up and/or forwards.

This is a largely involuntary, or non-volitional, process (making it different from weight training) and a natural consequence of our body’s soft tissue architecture.

However, this stretch-reflex response can be improved upon. Sports science shows how repeated plyometric training can increase power output, speed of muscular action and increase leg stiffness. It can improve maximal strength, too (ie, the ability to lift weights will get better).

Much of the science behind plyometrics dates back to Soviet era coaching and the work of Yuri Verkhoshansky. Indeed, much of his work goes under the header “Shock Method” – the shock being the impact and the reaction produced as a consequence of plyometrics.

Leg stiffness underpins physiological adaptation to plyometric training. Simply put, the greater the stiffness around the ankle, hip and knee joints, the more reactive and more powerful the energy return will be.

Although there are some specific ways to physiologically measure leg stiffness improvement, simple hopping tests can be used, as long as the performer is suitably conditioned in the first place.

Timing hops over 20m, for example, and counting the number completed can be a good test of leg stiffness. Those with superior stiffness will take less time and use fewer hops. Such a test would apply to athletes from all disciplines.

As Andy Kay wrote in the October issue of AW, greater leg stiffness for middle and longer distance runners will see their performance economy improved. Basically, these athletes will be able to run at race pace and below with greater economy.

Sports scientists who reviewed various strength training methods, which included plyometric training, identified this and have even discovered that the fastest 10,000m runners over 20m will usually be the fastest over race distance.