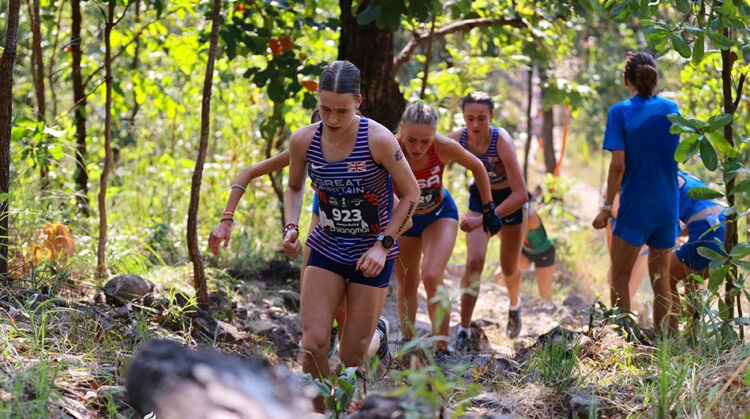 The Lake District’s rugged fells and the dramatic mountainous landscapes of Northern Thailand will forever be linked. While thousands of miles separate the two spectacular locations, the challenging terrain on Jess Bailey’s Cumbrian doorstep set her up for a dominant gold medal-winning performance in Chiang Mai at the inaugural World Mountain and Trail Running Championships last month.

Her victory in the junior classic up and down race was impressive, but her positive attitude is arguably even more so.

“The best team in the world,” she said in the immediate aftermath of the event. “The past week in Thailand has been one of the best of my life and spending it with these guys has made it even better. I am honoured to have been part of such an epic team.”

The 16-year-old is a wise head on young shoulders. Prior to Thailand she had never travelled outside of Europe, but with her race taking place on the final day of competition she chose to embrace the Asian culture alongside a young British quartet who shared her enthusiasm, ambition and a maturity beyond their years.

“I’ve never done anything like it before, it was amazing,” she reflects. “Because our race was the very last day we’d watched most other people race. There was just one race after us, so there was real hype building up to it. We had such a lovely week, though. We went to little markets and we saw some elephants – the experiences we had were great. I thought as the week went on we’d all get a bit more nervous, but that didn’t happen at all.”

The immediate bond which developed between the athletes, and their resultant “all for one, one for all” mentality, created a healthy environment where issues were raised and dreams were shared.

“We were really good friends from the off, even though we didn’t all know each other well,” says Bailey of fellow team gold medallists Rebecca Flaherty, Ellen Weir and Emily Gibbons. “As soon as we went away we did everything together. We did face paints for the opening ceremony and for the race, we listened to music and we got ready together.

“We were talking to each other before the race and the concern was how narrow the paths were. We knew we had a really good chance of a team prize so we said that, on the way down, if there was a GB runner trying to get past, then it wasn’t…