What next for Sydney McLaughlin-Levrone? 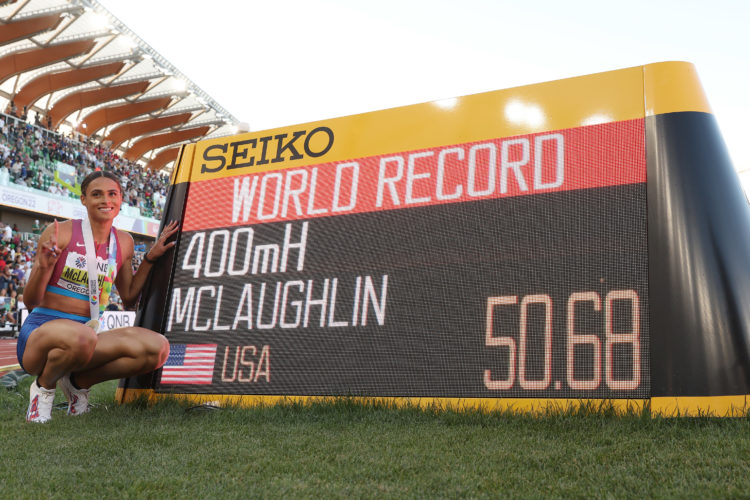 How do you follow a year of two world records and two global gold medals? Do it again – but faster! We hear from an athletics superstar who is only just getting started

As Sydney McLaughlin-Levrone flew across the line to become world champion, she glanced to her left – to the same spot in which all eyes in Hayward Field were now trained. The outcome of the women’s 400m hurdles final had not been in doubt from the moment the first barrier had been reached, but one question remained. What did the clock say?

The answer it delivered was truly astounding.

The American had obliterated not only the opposition but also her own world record, chopping a mind-boggling 0.73 seconds from her 51.41 run at the US trials on the same track to register 50.68. It would have placed her seventh in the women’s flat 400m final.

To have followed up 2021, a year in which she had become a two-time Olympic gold medallist and also broken the world record twice, in such style spoke volumes. However, she could barely speak in the immediate aftermath of leaving Femke Bol and Dalilah Muhammad trailing in her wake. There were no wild celebrations or outpourings of emotion, McLaughlin-Levrone simply sat down.

“I was trying to process the lactic acid,” she grinned once the dust had settled. “And I was taking a moment to enjoy what had just taken place. Sometimes the race goes by and you forget what happens but I really just wanted to sit there and soak it all in before getting into the craziness of what follows.”

What follows in the story of the 2022 AW international female athlete of the year – a teenage prodigy who is fulfilling her promise in remarkable style – will make for fascinating viewing.

At the post-race press conference of that world final, she spoke of potentially moving to the 400m and attacking the infamous 1985 world record of 47.60 held by East German Marita Koch. Doubling up with the 400m and 400m hurdles was also coming under consideration by her coach Bob Kersee. Has the conversation moved on?

“There’s more I can accomplish with the 400m hurdles and the 400m flat is something we’ve been interested in, but it’s something where the schedule would need to line up and I would have the time to rest in between races,” she tells AW. “Only time will tell!”

However, of Koch’s mark, she adds: “It’s a world record that has stood for 37 years and no other athlete since then has even been close to…