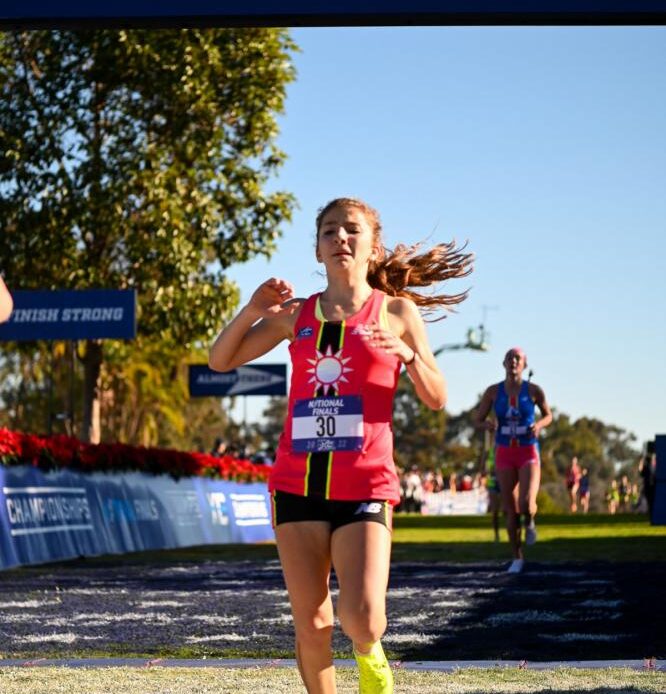 “It was kind of a normal course for me,” she said.

“Well, in West Virginia there’s not too many flat places,” her high school coach Mike Taylor said. “We have very big hills, so to speak – mountains – and we do a lot of training in the mountains.”

It makes sense Sauro hails from “the Mountain State.”

Nearly six months prior to running in San Diego, Sauro won the U-18 International Mountain Running Cup in Saluzzo, Italy. Adventurous and gritty challenges are nothing new to her.

“Early in her running career it became very clear that she didn’t like to lose and was eager to learn how to do better,” Taylor said.

So how did Sauro end up racing in the mountains of Italy last summer?

“Someone nominated me for it and I was honestly nervous for it,” Sauro said. “At first I was like, ‘I don’t know how I’m going to do this, but after I did it, oh my gosh, it was really exciting.”

Sauro began running in the sixth grade and also played basketball, but mountain running was never on her bucket list. Taylor explained that his brother, Steve Taylor, who is the coach at the University of Richmond, and also an 11-time West Virginia State High School Champion (cross country and track) suggested the race.

“My brother Steve made us aware of the opportunity to apply for the (U-18) USA Mountain Running Team,” Taylor said. “Thankfully she was selected as one of the four girls to represent the USA team.”

Along with Victoria Rodriguez (Seven Valleys, Pa.), Rosie Mucharsky-O’Boyle (Denver) and Milaina Almonte (Edwards, Colo.), the four were announced in May and set to race June 26. Taylor explained the training leading up the race in Saluzzo consisted of trail running in the nearby Wayne National Forest: 2×1 mile hill repeats on a 9 percent grade hill, and lots of stair running to prepare for the 4.4-kilometer course that went through the town…