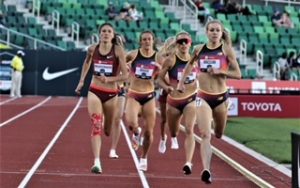 The trajectory growth of New Balance Boston’s Elite team has been directed pretty successfully through the last few years by Olympian Mark Coogan. It should not strike one as unusual. From his own athletic growth three decades ago through the ranks to the starting line of the Olympic Games, Coogan has been able to harness his past experiences and coaching philosophies into a truly successful product.

In 2023 Coogan will be sharing his “secrets” in a new book coming out soon!

Here are a few questions for Coach Coogan as the 2023 season begins!

“NB Boston had another very successful year in 2022.  We won both distance races at US Indoor Championships.  Heather MacLean won the 1,500 meters, and Elle won the 3,000 meters.  Heather and Elle joined their NB Boston teammates Siofra  Cleirgh Buttner and Julie Anne Staehli in Belgrade for the World Indoor Champs.  We have a small team so having four of them at the World Champs was a very good start to the year. Then having Elle win a medal at world indoors was a big deal for the team.

Then, New Balance opened our new indoor track on the NB Campus in Boston, and we immediately set the World Record in the DMR.  We beat both the indoor and outdoor records on April night.  Millie Palidino had a breakout year running 15:02 indoors and 31:19 in her 10k debut, which was the 6th fastest time by an American. Heather, in 1500 meters, won the US Indoor Championships and finished 7th at the World Indoor championships. After recovering from Covid, Heather had an awesome outdoor season.  According to World Athletics, she ran the fastest 1500 by an American and ended up being ranked 9th in the world.  She should be the top-ranked American in the 1,500 this year.  Julie Anne ran in the Commonwealth Games for Canada and won the Canadian Champs in cross country.”

2) When did the rest/downtime begin, and how are the runners progressing to this point?

“Everyone has had different downtimes depending on their seasons, but now everyone is back training well except for Elle, who is 7 months pregnant. We make sure to take a good break after the long season…