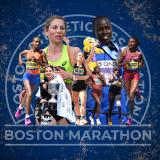 “Each year the B.A.A. welcomes strong, competitive, and talented fields to Hopkinton, with athletes ready to race for 26.2 miles,” said Mary Kate Shea, B.A.A. Director of Professional Athletes & Technical Support. “This year’s field is among the fastest and most decorated professional fields in history, and we anticipate an exciting race from start to finish on Patriots’ Day.”

A total of 16 women entered in the field have run the marathon under 2 hours, 21 minutes. Making their Boston Marathon debuts are three athletes who notched impressive breakthrough performances in 2022: Israel’s Lonah Salpeter, Kenya’s Sharon Lokedi, and Ethiopia’s Amane Beriso. Last year Salpeter earned a bronze medal at the World Athletics Championships Marathon then placed second at the TCS New York City Marathon. Lokedi, a former NCAA champion at the University of Kansas, claimed victory in her debut marathon in New York City last fall, while Beriso ran the third fastest marathon time in history – 2:14:58—to win Valencia and set a new national record in December.

“I am very excited to run the B.A.A. Boston Marathon this year,” said Salpeter. “It has always been my dream to run these streets one day and to experience the incredible atmosphere. I am extremely grateful to the organization for inviting me to run in their city. For now, I am focused on my preparation and I look forward to seeing all the fans along the course in Boston!”

Last year’s second and third place finishers in Boston, Ababel Yeshaneh of Ethiopia and Mary Ngugi of Kenya, both return with hopes of claiming the top spot on the podium. Yeshaneh came within four seconds of victory, while Ngugi has placed second and third in Boston. Also back is Joyciline Jepkosgei, a past winner of the New York City and London Marathons.

“Running Boston last year was an incredible experience, and I will never forget the crowd cheering down Boylston Street as I ran towards the finish line in an epic…