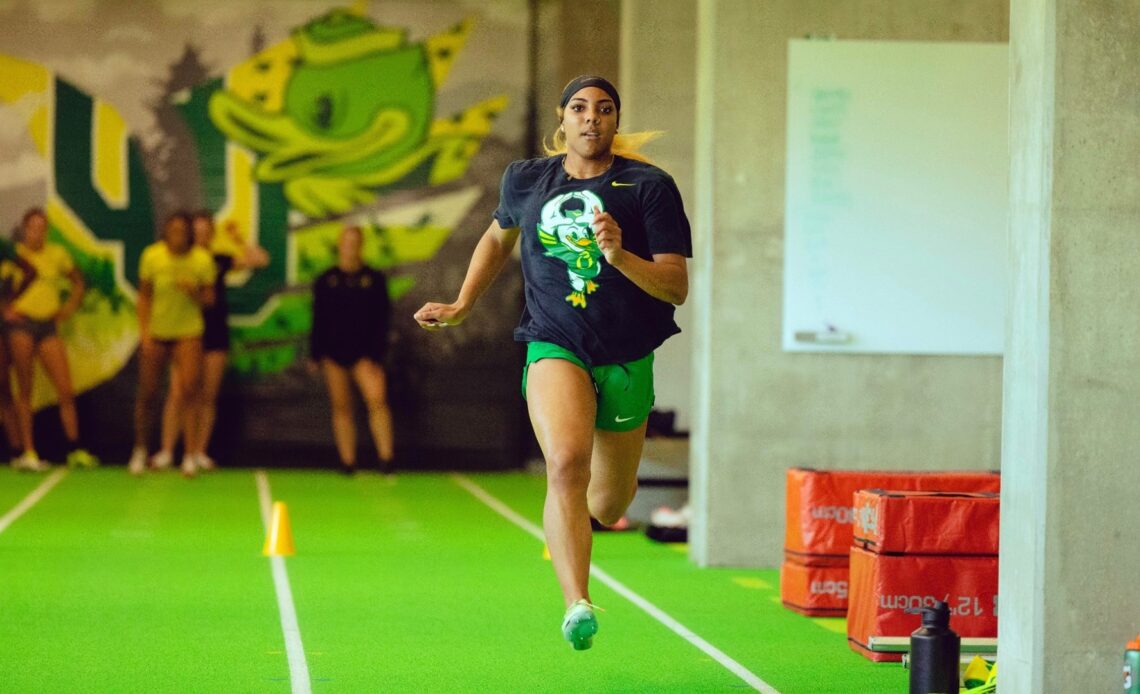 EUGENE, Ore. – The Oregon track and field team will open its 2023 indoor campaign with two meets in Washington this weekend beginning Friday with the Cougar Classic in Spokane. Action at the UO season opener begins at 9 a.m. with the men’s high jump. The Ducks will also have a group competing Saturday at the UW Preview in Seattle. Both meets will be streamed on RunnerSpace.

Micah Williams and Jadyn Mays headline the Ducks’ sprint entries in Spokane. Williams won the 2021 NCAA title at 60 meters and is the school-record holder (6.48) in the event while Mays owns a lifetime best of 7.09—No. 3 in UO history—from last year’s NCAA Championships where she finished third.

Both short sprints—60 meters and 60-meter hurdles—will feature a preliminary round and a final. The Ducks’ jumps and combined events groups will also be featured during Friday’s season opener.

Alysah Hickey, indoor school-record holder in the long jump (6.66m/21-10.25) and NCAA qualifier last season, is among the team’s entries in the 60 meters. The Ducks will also have NCAA DMR medalists Xavier Nairne and Katriina Wright in action Friday, both scheduled to run the 60 and 200 meters.

Most of the team’s entries in Seattle come in the women’s 3,000 meters with Maddy Elmore, Klaudia Kazimierska and recent cross country All-American Izzy Thornton-Bott running the fastest of five heats. Thornton-Bott and Mia Moerck, entered in the mile, were part of the Ducks’ third-place DMR from last season’s NCAA Championships.

Saturday will also feature top-10 UO performers in Mason Strunk (No. 2/weight throw) and Jaida Ross (No. 5/shot put). Strunk owns a best of 20.84m/68-4.5 from last season, trailing only Greg Skipper on the Ducks’ top-10 list. Ross, Mine De Klerk and transfer Jorinde Van Klinken are all entered in the shot put. Earlier this week, Van Klinken was named to The Bowerman preseason watch list.

In total, nine Ducks are scheduled to make their UO debuts this weekend including Van Klinken. Three other UO women—Elmore, Kazimierska and Kendall Martin—ran cross country this past fall and will appear on the track for the first time in their collegiate careers.