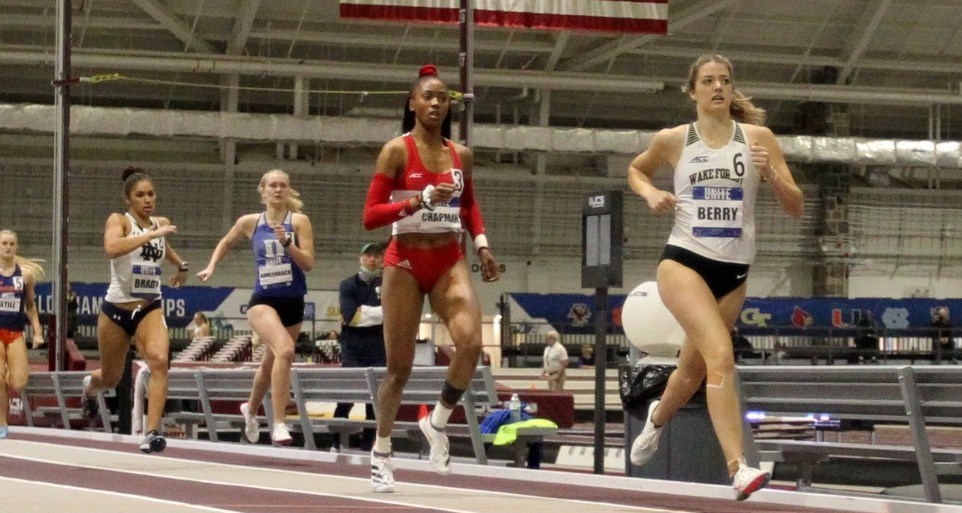 
BLACKSBURG, Va. – The NC State track and field program recently traveled to Blacksburg to compete in the Virginia Tech Invitational, their second event of the season. The Wolfpack saw multiple athletes set personal bests and watched senior Timara Chapman claim a school record for her time in the women’s 500m.

SPRINTS
In the women’s 500m final, Timara Chapman broke a school record for her time of 1:15:58. The Wolfpack senior’s performance earned her second place overall in the event. Right behind Chapman was NC State junior Caroline Lewis, who set a personal best in the 500m for the second straight year at the Virginia Tech Invitational. Her time of 1:16:85 now ranks third all time in NC State history.

Ally Henson got the Wolfpack off to a hot start on the day, moving past the women’s 60m hurdles prelims with a time of 8.61. After advancing to the final, she bested her original time, registering a final time of 8.54 to claim fourth place. She is now tied for the sixth fastest time in Wolfpack history with teammate Mikieja Covington.

JUMPS
Wolfpack senior Jirah Sidberry represented the Pack in the women’s triple jump final and finished in first place with a distance of 12.71m (41’8.5″). This now gives her the fifth best time in school history.

The Wolfpack also had some veteran talent on display in the men’s triple jump, as senior Jamar Davis finished third overall with a jump of 15.25m (50’2.5″).

The Wolfpack had two athletes achieve personal records and finish in the top 10 in the women’s weight throw final. Makala Wright took third place with a throw of 19.05m (62’6.0″), while Mahkayla Hart finished in ninth place, recording a throw of 17.15m (56’3.25″).

UP NEXT: The Wolfpack will be in action tomorrow for the second day of the Virginia Tech Invitational.