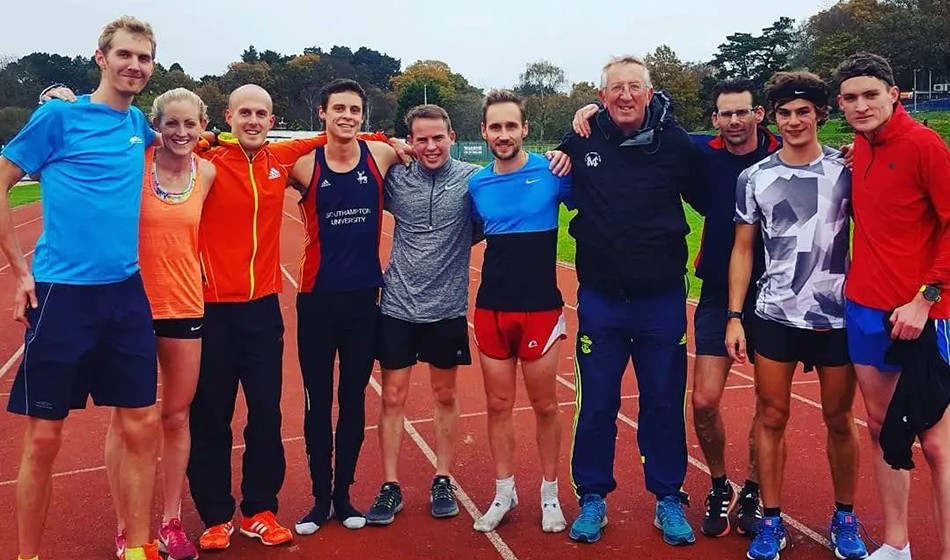 Rod Lock died peacefully at Royal Marsden Hospital in Chelsea on Saturday (Jan 7) from cancer aged 73. He had been surrounded by friends and athletes he had coached in his final days, and was inundated with calls and voice messages from the same folk. With tears in my eyes I will recall, with the help of some of the people that maybe knew Rod the best, some of the lessons, memories and highlights or “PBs” of his life, and his legacy to the world of athletics and beyond.

Rod’s interest in running really accelerated in the early 1980s. A group of enthusiasts, notably his good friends and colleagues Mick Varley and Steve Till would partake in regular 10-mile runs from Blackfriars to Hyde Park and back. Excursions to the Sri Chinmoy night races in Battersea Park (where Rod, pictured in the main image in the blue tracksuit) would reconvene with dear friend Frank Horwill, the founder of the British Milers’ Club), and 5km races in Hyde park were frequent. Rod would organise teams for the Sunday Times Fun Run, as well as training weekends on the sand dunes of Merthyr Mawr (which along with the summer Ardingly edition, became the basis of BMC training camps), as the group got more serious. He also put together trips to events such as the 20km de Paris and the Berlin Marathon. Many of Rod’s work colleagues and friends took up running simply because of the supportive atmosphere that Rod created.

Steve Till recalls: “Rod was always so supportive. Before I could drive, he would ferry me out to various 10km, 10-mile and half-marathon races, where we would both often set PBs. No words can really do justice to the decades-long, multi-faceted nature of the help, support and advice that Rod gave so freely, even before he formally started coaching.

“He would provide me drinks for my ultramarathons: on one occasion, he inadvertently gave me a cup of water with some gravel in the bottom: I complained about the standard of service and every subsequent time I asked for a drink, he would quip: ‘With or without grit, Sir?’

“Mick, Rod and I celebrated Rod’s 40th birthday by running the New York City Marathon in 1989.  Unfortunately, Rod stood a bit too close to one lady, whose rather enthusiastic arm-thrust knocked the cup of hot chocolate he was holding all down his front, making the subsequent 26.2 miles very sticky and uncomfortable for him!…