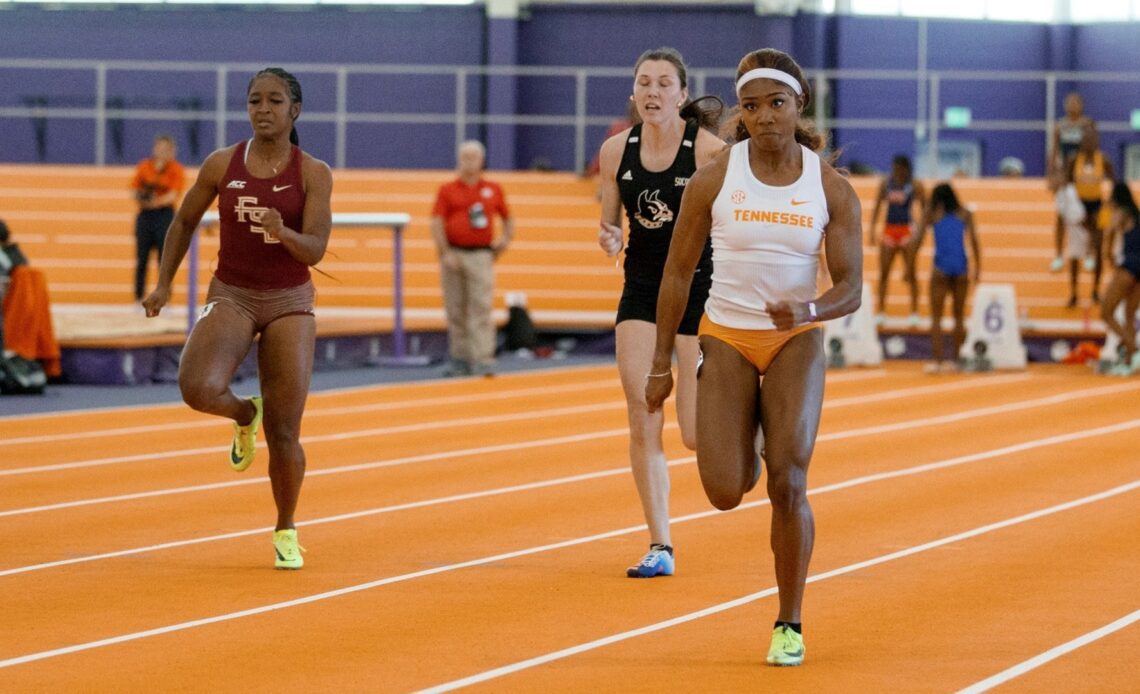 Making their Tennessee debuts in the women’s 60-meter dash, juniors Jacious Sears and Jonah Ross clocked times of 7.20 and 7.25 in the final to place fourth and sixth, respectively. Sears’ time tied Cleo Tyson (2006) as the third fastest performer in school history in the event, while Ross now sits 10th on the Lady Vol charts.

Fifth-year senior and 2020 Olympian Joella Lloyd, who owns the 60-meter school record mark at 7.15, took third in the event on Friday with a 7.20 clocking.

In the women’s long jump, junior Mikele Vickers demolished her personal-best with a leap of 6.21m (20-4.5) on her second attempt to place third in the event at Clemson. The jump ranked Vickers ninth on the all-time Lady Vol performance list alongside her current teammates, Charisma Taylor and Prom’myse Hoosier, and the program’s director of operations, Ellen (Wortham) Hurst.

TOP FIVE OUTINGS: Lady Vol graduate Charisma Taylor got her fifth collegiate season off to a strong start in the 60-meter hurdles, winning her preliminary heat in 8.36 seconds before coming back in the final to run 8.20 and place third overall. The four-time All-American returns to action Saturday with entries in the triple jump and 200-meter dash.

A pair of Lady Vol seniors had career-best season debuts on Friday with Prom’myse Hoosier competing in the long jump and Chandler Hayden in the weight throw. Hoosier leapt 6.19m (20-3.75) while Hayden threw 20.06m (65-9.75) for their best season openers since joining the program in 2019, and both athletes placed fourth in their respective events at Clemson.

Tennessee’s Lady Vol pole vaulting trio of Ellison Colarossi, Kendall Ford and Sarah Schmitt each tallied podium finishes on Friday with Colarossi logging a lifetime-best clearance of 3.85m (12-7.5) to take second overall. Ford and Schmitt tied for third after clearing 3.75m (12-3.5), which was a personal best for Ford in her collegiate debut.

Running the 400-meter dash, freshman Javonya Valcourt and redshirt-junior Rasheeme Griffith each posted indoor PRs to begin their campaigns at…