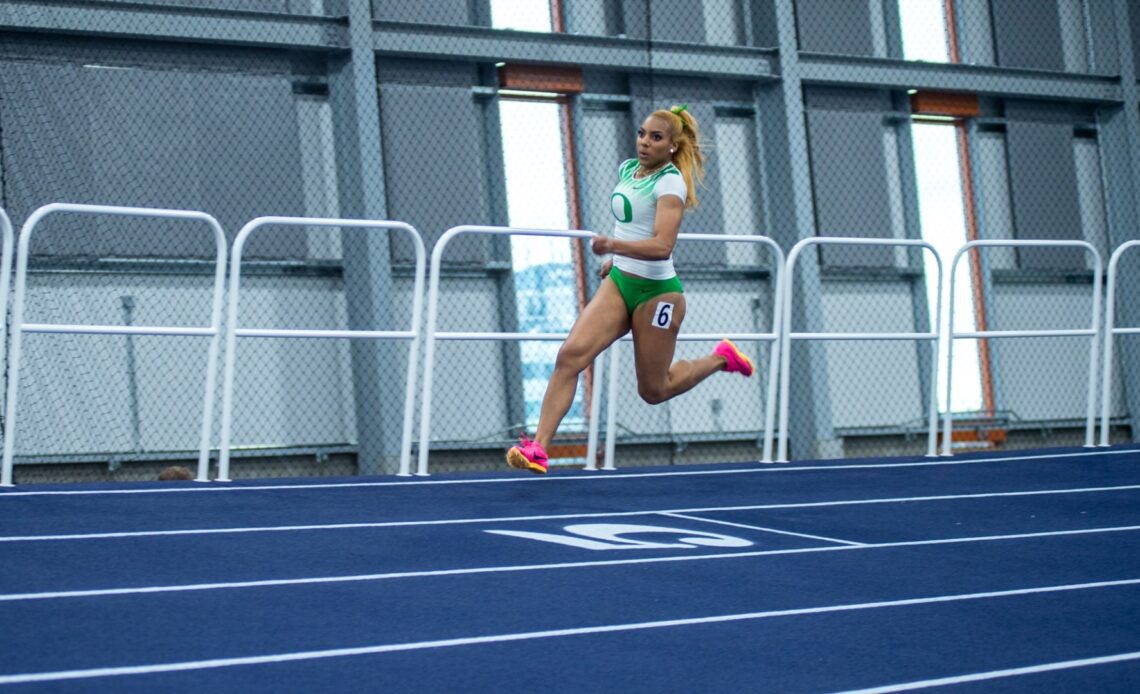 SPOKANE, Wash. – The Oregon track and field team opened its 2023 indoor season Friday with 12 top-three finishes including three wins and a pair of top-10 program marks. Jadyn Mays swept the women’s 60 and 200 meters at the season-opening Cougar Classic in Spokane, Wash., while Micah Williams took over the world lead—briefly—in the men’s 60 meters.

After picking up a victory in 7.25 over 60 meters, Mays returned to the track to lower her personal best in the 200 to 23.18 which secured a second victory. The performance also moved Mays to No. 8 on the UO top-10 list, just .01 behind former standout Amber Purvis in program history. In Friday’s 200 meters, Shaniya Hall dipped below 24 seconds in 23.99 for fourth place.

Mays was third at last year’s NCAA Indoor Championships in the 60 meters.

Collectively, the UO women put four inside the top 10 with Ella Clayton (24.28) and freshman Lily Jones (24.50) in sixth and ninth, respectively. Jones was fourth in the 60 meters earlier in the day, running 7.37 in the final.

Williams, the fastest qualifier in the prelims, dropped a time of 6.54 in the final to run away with the top spot. With the showing, the Portland native currently ranks second in the world this season; Ismael Kone of Florida State ran 6.51 in Clemson, S.C., just over an hour after Williams’ race. The UO standout is now up to nine time of 6.55 or faster in his career.

In fifth place in the men’s 60, Kwabena Lynn ran 6.77 to establish a new lifetime best.

Freshman hurdler Aaliyah McCormick made a strong first impression in her debut Friday. In the semis of the 60-meter hurdles, the San Diego native crossed the finish line in 8.20 to take over the No. 5 spot on the Oregon top-10 list. She came back to finish third (8.23) in the final, and was seventh in the 60-meter final after posting a qualifying time of 7.51 in the prelims.

Eugene native Taylor Chocek finished sixth in the 60-meter hurdles with a new personal best of 8.52 to knock more than a quarter of a second off her previous best (8.78) last season.

In a pair of personal-best outings, Jonah Tactay and Hannah Ganashamoorthy finished third in the men’s and women’s long jump, respectively. Tactay saved his day’s best of 7.18m/23-6.75 until the final round of his series while Ganashamoorthy started strong with a 5.80m/19-0.5 mark on her second attempt.