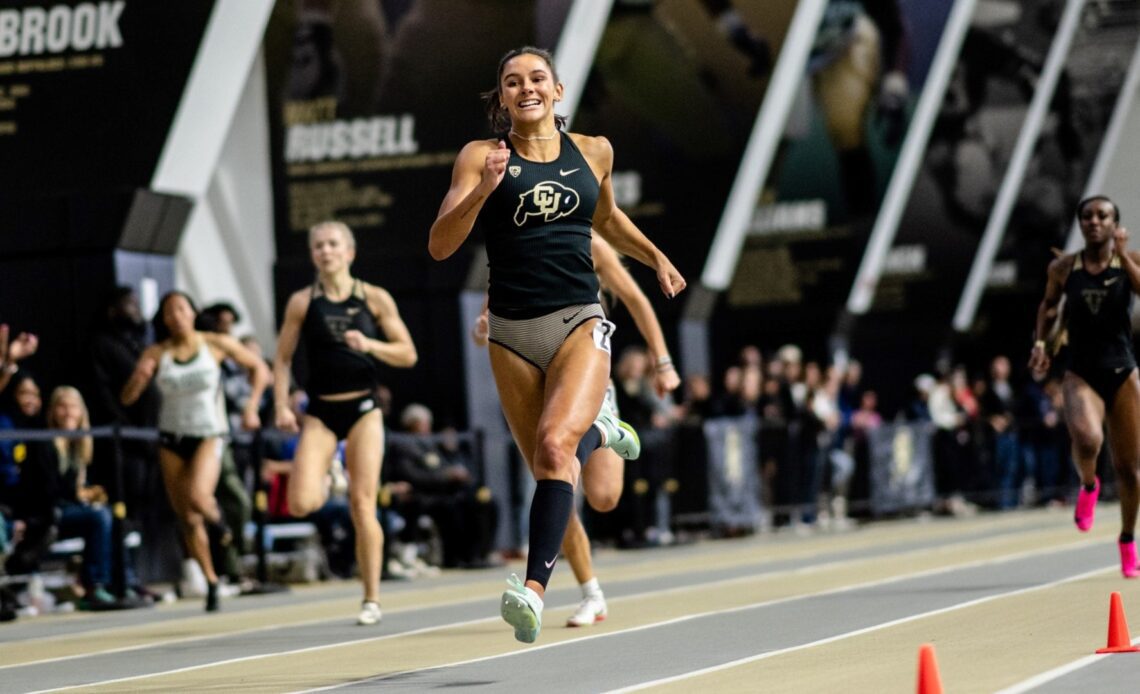 
BOULDER — Colorado track and field women’s sprinters and hurdlers showed out here Saturday in the final day of the Potts Invitational, picking up three wins and two top-10 marks in school history.

The women’s 60 hurdlers got things going qualifying four through to finals in Avery McMullen, Jada Green, Joy Moorer and Eva Bruce. The quartet headed to finals where McMullen won in 8.31 seconds, followed by Green in second in 8.44 seconds. The mark moves Green up to eighth in school history. Eva Bruce finished fifth in 8.79, while Moorer finished eighth in 9.01.

The women followed in up with a one-two finish in the 400-meter dash with Grace Jenkins winning in 56.81 while Jaida Drame was second in 57.52 seconds.

A quartet of Buffs finished in the top eight to close out the sprints in the 200. Emma Pollak won the event in 24.04 seconds, bettering her third-best mark in CU history. McMullen came in second running 24.39, followed by Green in fifth in 25.10 and Moorer in eighth in 25.52 seconds.

On the men’s side, the 4×400-meter relay of Ian Gilmore, Luke Dry, James Milholen and Tyler Williams won in 3:12.51, the eighth-best mark in CU history.

The men’s sprinters also had Luc Andrada finish third in the 60-meter finals in 6.81 seconds followed by Gilmore in fourth in 6.91 seconds. Moving up to the 200, Milholen finished third in 21.61 seconds while Williams finished fourth in 21.64 and Andrada finished seventh in 21.81 seconds. The sprints squad finished out the scoring with Dry finishing third in the 400 in 48.95, followed by Cole Romig in sixth in 49.83 seconds.

The distance squad also had a pair of top-five finishes with Grady Rauba finishing the mile fifth in 4:12.32 while Whitney Valenti was fifth on the women’s side in 5:03.61 seconds.