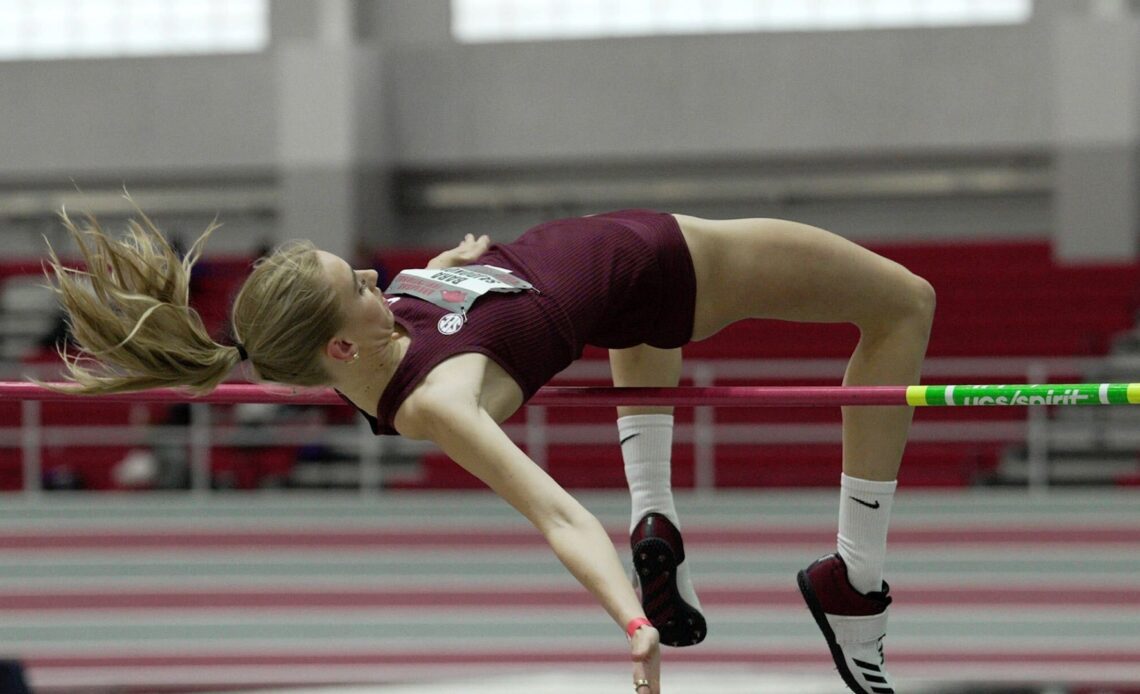 FAYETTEVILLE, Ark. – Bára Sajdoková set the tone early for the Aggies, as the men’s and women’s teams combined for six victories at the Arkansas Invitational at the Randal Tyson Track Center on Friday.


Sajdoková started the day strong for the Aggies, winning the women’s high jump with her clearance over 6-0/1.83m. The jump improves her number six mark on the Texas A&M all-time performers list, topping her previous mark of 5-11.5/1.82m.

Jonair Thomas added a victory in the women’s long jump, as the South Plains transfer soared 19-11.5/6.08m to win the event. G’Auna Edwards, a transfer from Arkansas, placed third with a leap of 19-8/5.99m.

Kennedy Wade led the way for an Aggie sweep on the women’s 300m podium, winning the event at 37.40. Tierra Robinson-Jones finished second with a time of 37.53, while Leeah Burr rounded out the trio, clocking 39.44 to cross the line in third.

In the men’s mile, Eric Casarez hit the gas at the sound of the gun and never let up, crossing the line in 4:02.55, making him the sixth-best performer in school history. Casarez’s time, which earned him fifth overall, bettered his previous personal best of 4:08.21 by over five seconds. Spencer Werner finished with a time of 4:12.65, while Teddy Radtke (4:13.59) and Francesco Romano (4:14.83) clocked personal bests.


Showing off her speed in the women’s 60m, Semira Killibrew blazed a 7.29 in the prelims, tying the ninth-fastest time in Texas A&M history. The result earned her a spot in the final, where she clocked a 7.30 to place second.

Running in the 60m hurdles and the 200m, Connor Schulman set personal bests in both events. His 200m time of 21.90 was good enough for 10th place, while his 60m hurdle time of 7.78 helped him finish runner-up in the final and maintained his place at number six on the Texas A&M all-time performers list, bettering his 7.80 from 2021.

The Aggies showed out in the men’s and women’s 3000m, as Chandon Chhikara and Julia Abell won their respective races. Chhikara led from the gun and held off Clark Otte of SFA in the final lap to win, crossing the line in 8:13.79. Abell relied on a last second surge to storm past the field and claim the victory in 9:39.87, leading the other Aggie women through the finish line. Behind Abell, Grace Plain came in third with a 9:40.64, and Abbey Santoro crossed…