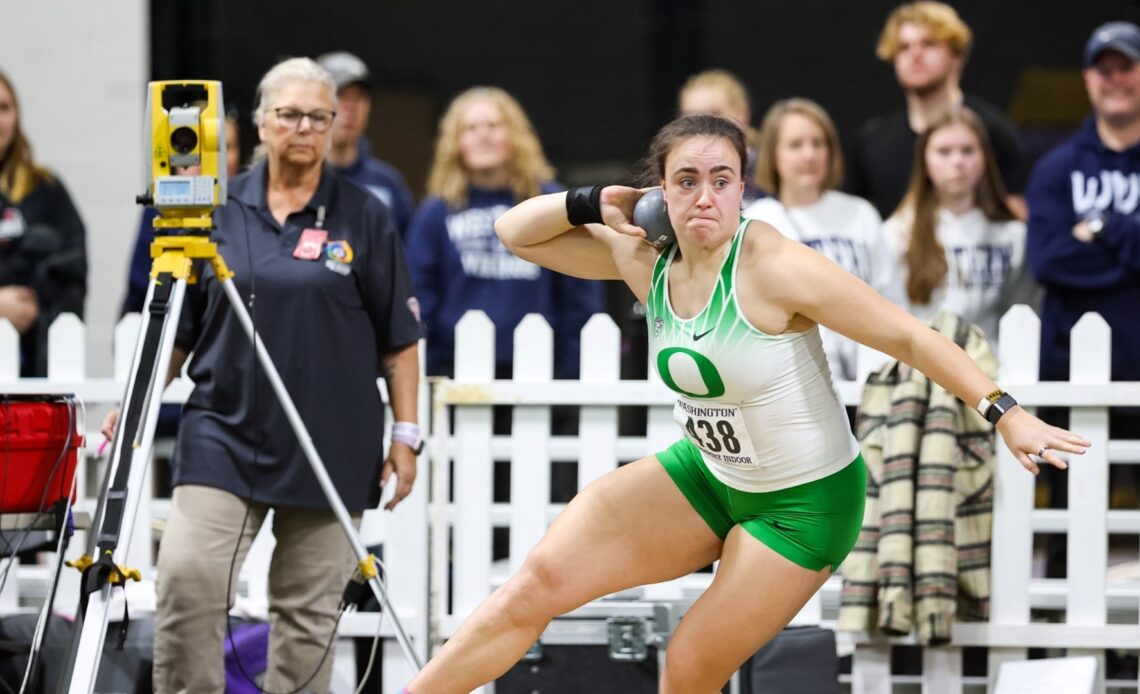 In her first meet as a Duck, Van Klinken led a 1-2-5 finish for the UO women in the shot put highlighted by her program-record toss of 18.11m/59-5 in the first round. She went on to add an 18.04 effort in the fifth round, good for the 11th and 12th 18-meter throws of her indoor career. Van Klinken, the reigning NCAA champion in the event, takes over the national lead with Saturday’s performance.

Van Klinken, a transfer from Arizona State, was named to The Bowerman preseason watch list earlier this week.

Jaida Ross put together a series featuring five marks beyond her previous indoor PB including the final throw of 17.40m/57-1 to finish second behind Van Klinken and move into a tie for the No. 2 performer in UO history, tying the old record set by Brittany Mann in 2015. Mine De Klerk, in the first indoor meet of her career, rounded out the trio with a best of 15.65m/51-4.25—No. 8 at UO—in the round five.

The Men of Oregon got a pair of runner-up finishes from Matthew Erickson at 600 meters and Mason Strunk in the weight throw. Erickson clocked a time of 1:18.96 in the fastest of three heats and placed ahead of freshman teammate Matt Pueschner (1:20.23) who won his heat and finished third overall.

Elliott Cook, the reigning Pac-12 champion at 800 meters, was third overall over 1,000 meters Saturday and second among collegians.

Izzy Thornton-Bott opened her indoor campaign with a lifetime best of 9:13.70 in the 3,000 meters. In the process of knocking more than 12 seconds off her previous best (9:26.16) from last season. Eugene native Maddy Elmore (9:20.05) also turned in a top-10 finish in the event, taking sixth place.

In the Ducks’ first result of the day, Mia Moerck—in her first-career indoor mile—crossed the line in a time of 4:43.80 to finish 11th overall and sixth among the collegiate entries. Moerck ran the 800-meter leg of last year’s third-place DMR at the NCAA Indoor Championships.

The Bagsvaerd, Denmark, native doubled back to finish eighth overall in the 800 with a time of 2:08.90 in the fourth of five heats.

With the season-opening weekend behind them, the Ducks resume their indoor season in two weeks with a scheduled three meets: Texas Tech Multis (Jan. 26-28), Razorback Invitational (Jan. 27-28) and UW Invitational…