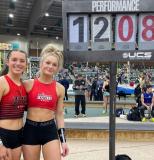 RENO – The momentum continued Saturday at the UCS Spirit National Pole Vault Summit for Northwest Pole Vault Club, which demonstrated the future of the group remains bright even after twin sisters Amanda Moll and Hana Moll graduate this spring from Capital High and transition in the fall to the University of Washington.

Ella McRitchie, a junior at Bainbridge High in Washington who took third in June at Nike Outdoor Nationals, won the elite girls high school competition with a clearance of 13 feet, 8 inches (4.16m) and Inglemoor High sophomore Jacqueline Jones prevailed in the No. 3 high school section with a personal-best 12-8 (3.86m) at the Reno-Sparks Livestock Events Center.

McRitchie cleared 13-8 on her first attempt to prevail against Indianapolis Cathedral senior and South Dakota signee Kailee Swart, who took runner-up for Pole Vault Elite with a 13-4 clearance (4.06m).

Emma Tindall, a senior at Sunnyvale High representing Texas Express, cleared both 12-4 (3.76m) and 12-8 on her first attempts to secure the victory.

Sophia Kowalski of Conroe Grand Oaks and The Woodlands Pole Vault Club produced second-attempt clearances at 12-4 and 12-8 to tie for second with Brooke Walden of Homewood High in Alabama.

Jacelyn Neighbors, a junior at Royse High and Tindall’s…