Giffnock North athlete Craig Shennan is no stranger to a cross country title in Scotland and he added his first at U17 level in Perth.

Amy Teasdale, meanwhile, took the U17 Women’s Inter-District gold only eight days after winning 30900m gold indoors and just a few weeks into working with a new coach.

The U17 races were over 6k and in with the U20 Cross Challenge event.

Shennan, a National champion at Falkirk at U13 and U15 level, took both Cross Challenge and Inter-District golds with a fine run as he headed the East’s Reiss Marshall and the West’s Oliver Patton in our Inter-District podium.

‘It was fun to race and I’m really pleased with that,’ smiled Craig.

‘I ran in the Cross Challenge at Milton Keynes in November and tested positive for Covid on the Monday after we came back. It knocked me off training for a bit.

‘Today I was spiked after about 100m on the first turn and I could feel it. But after a bit I just ignored it and kept going.

‘I love cross country and this is my first national victory in the U17 age group.’ 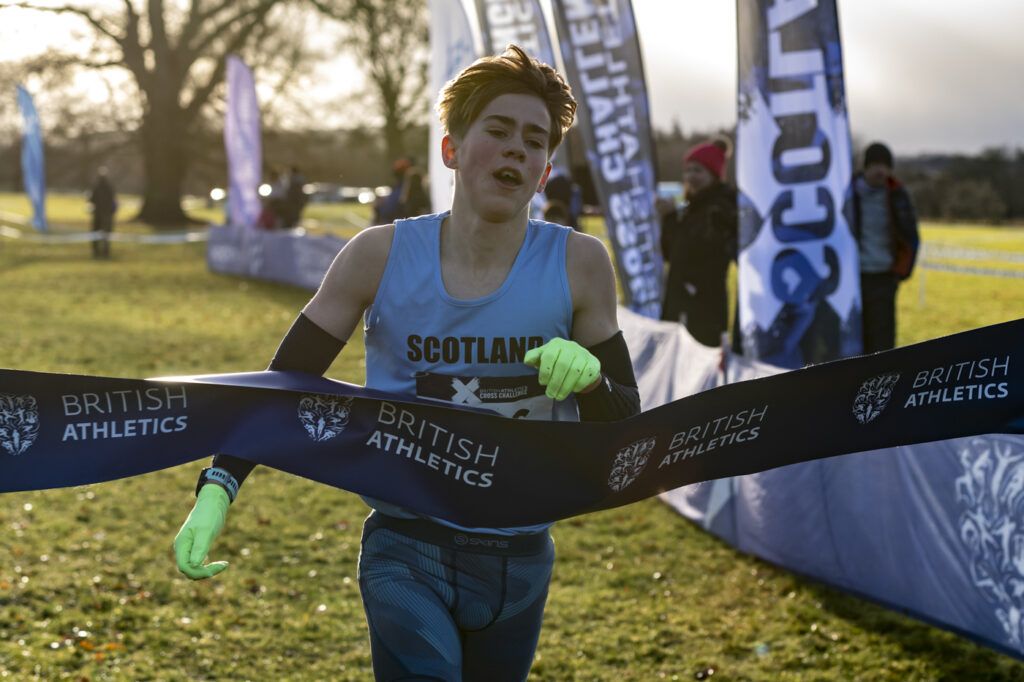 Amy was second in the Cross Challenge to English athlete Zoe Gilbody. Millie McClelland-Brooks (West) followed the Kilbarchan AAC athlete home for second in the Inter-Districts with Caitlyn Heggie landing another individual medal for the North in third.

‘It’s the longest race I’ve had being over 6k and obviously it is wee bit different from 3000m indoors,’ laughed Amy.

‘It was really wet and muddy today and a tough run when you hit the hilly sections. I enjoyed it and I’m working with Sarah Dempsey now as my coach and it’s been good.

‘I really got into running during the Covid lockdowns. I just couldn’t sit around the house all the time and felt I had to get out the door.

‘At one stage I was running almost every day but since then I’ve been to the club (Kilbarchan AAC) and there’s more structure to my training now. I am looking forward to Falkirk now.’

In the U13 Girls race, Cerys Wright (East) took victory in the both the Inter District and British Cross Challenge races.

With Penelope Boyle (Leven Valley) second  in the British Cross…