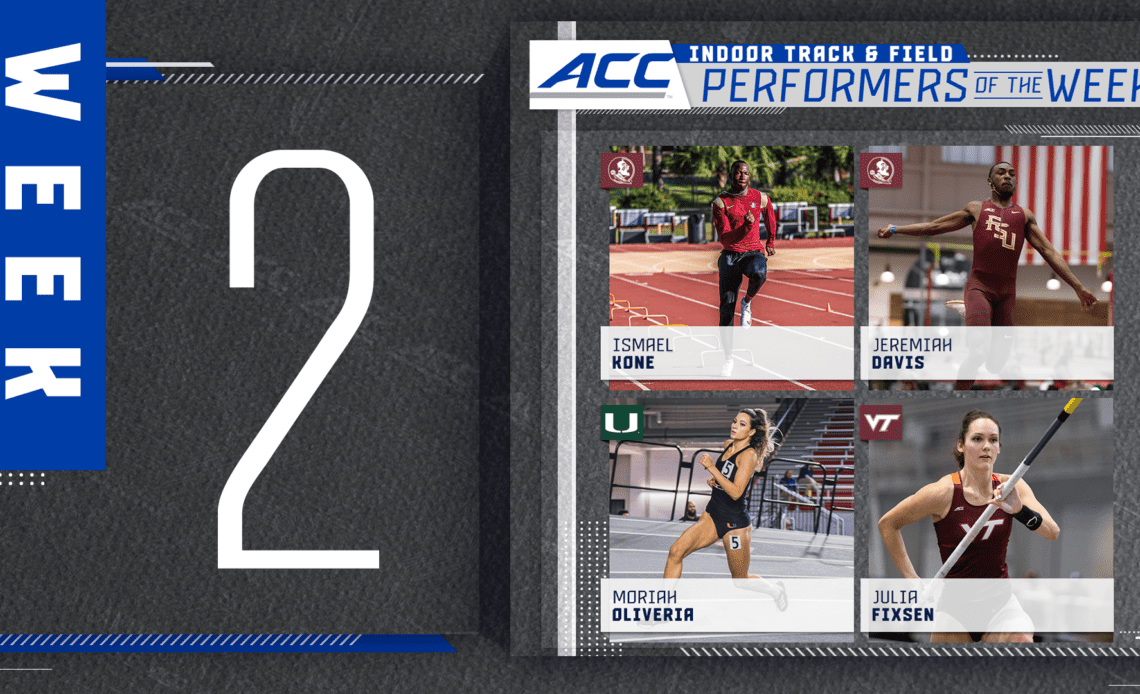 ACC’s Men’s Track Performer of the Week
Ismael Kone, Florida State
Kone tied the ACC record in the 60-meter dash and set a Florida State school mark with a world-leading time of 6.51 at the Clemson Invitational. Kone tied the ACC record set by Clemson’s Jacoby Ford at the 2009 ACC Indoor Championships and equaled the 13th-fastest time in NCAA history.

ACC’s Men’s Field Performer of the Week
Jeremiah Davis, Florida State
Davis ranked No. 1 nationally in the long jump and No. 6 in the triple jump following last weekend’s competition at the Clemson Invitational. Davis became the first and only NCAA competitor so far this season to exceed eight meters in the long jump with his mark of 8.17 meters (26-9.75). He also set a personal best mark in the triple jump at 16.04 meters (53-7.25).

ACC Women’s Track Performer of the Week
Moriah Oliveira, Miami
Oliveira placed first in the Louisville Cardinal Classic and ranks third nationally with her 400-meter time of 53.48. The Fort Myers, Florida, junior also ran the second leg on the Hurricanes’ 4×400 relay team, which placed second in the meet with a time of 3:33.1 and currently ranks fifth nationally.

ACC Women’s Field Performer of the Week
Julia Fixsen, Virginia Tech
Fixsen posted a mark of 4.45 meters (14-7.25) in the pole vault at the Virginia Tech Invitational which ties for the nation’s best in the early going. Fixsen cleared the mark on her third attempt of Saturday’s competition before retiring for the day.