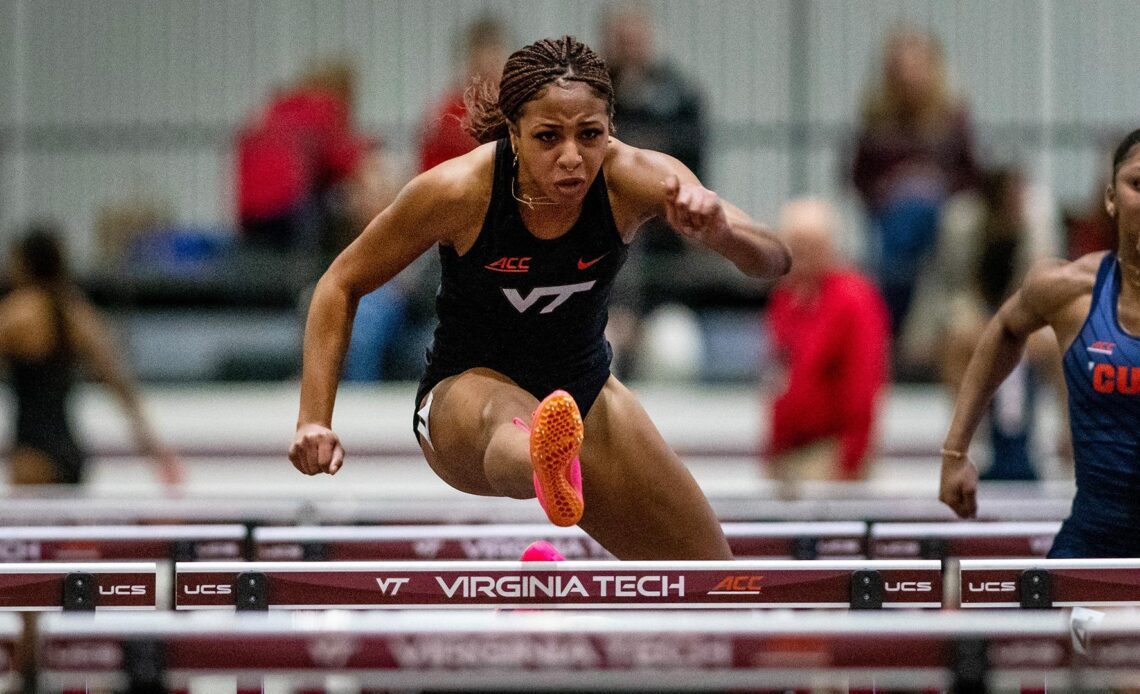 BLACKSBURG – Virginia Tech track and field prepares to host the Hokie Invitational on Friday, Jan. 20 in Rector Field House. The meet will begin at 10:30 a.m. with the men’s heptathlon. Open field and running events will begin at 4:00 p.m. on Friday with the women’s pole vault.  Live Results, Schedule of Events

Hokies in the Top 10

ACC Women’s Field Performer of the Week Julia Fixsen flew high above the bar as she opened her season at the Virginia Tech Invitational with the top mark in the nation. Fixsen retired for the day after clearing a height of 14′ 7.25″ (4.45m). Freshman Kenna Stimmel finished third among collegiate athletes in her first collegiate meet clearing a height of 13′ 11.25″ (4.25m), currently ranked ninth.

Returning senior Rebecca Mammel started the women’s weight throw with the best mark of the day at 75′ 4″ (22.96m), currently ranked third in DI. Fellow teammate Sara Killinen is ranked sixth in the nation after scoring a distance of 72′ 9″ (22.17m).

Chauncey Chambers is looking to make his fourth trip to the NCAA Championships this year jumping 52′ 7.25″ (16.03m) in the triple jump during his 2023 season debut. Chambers took the lead on his first attempt of the day and held on through six rounds, he is currently ranked seventh.

Hokies to Watch this Weekend

Layla Anderson is schedule to compete in the women’s 200m and 60m hurdles. Anderson celebrated her first 60m hurdles career win at the Virginia Tech Invitational running a personal-best time of 8.28. Cierra Pyles is one of three women in the ACC to clear 41′ (12.5m) in the women’s triple jump this season, finishing second with a jump of 41′ 4.25″ (12.6m).

The Stride Report listed the women’s 1k as the event to watch on Friday with some of the Nations fastest distance runners competing. Nation Indoor Champion Lindsey Butler is favored to do well in the event after a strong showing in the season opener finishing second in the 3000m with a personal-best time of 9:27.05.