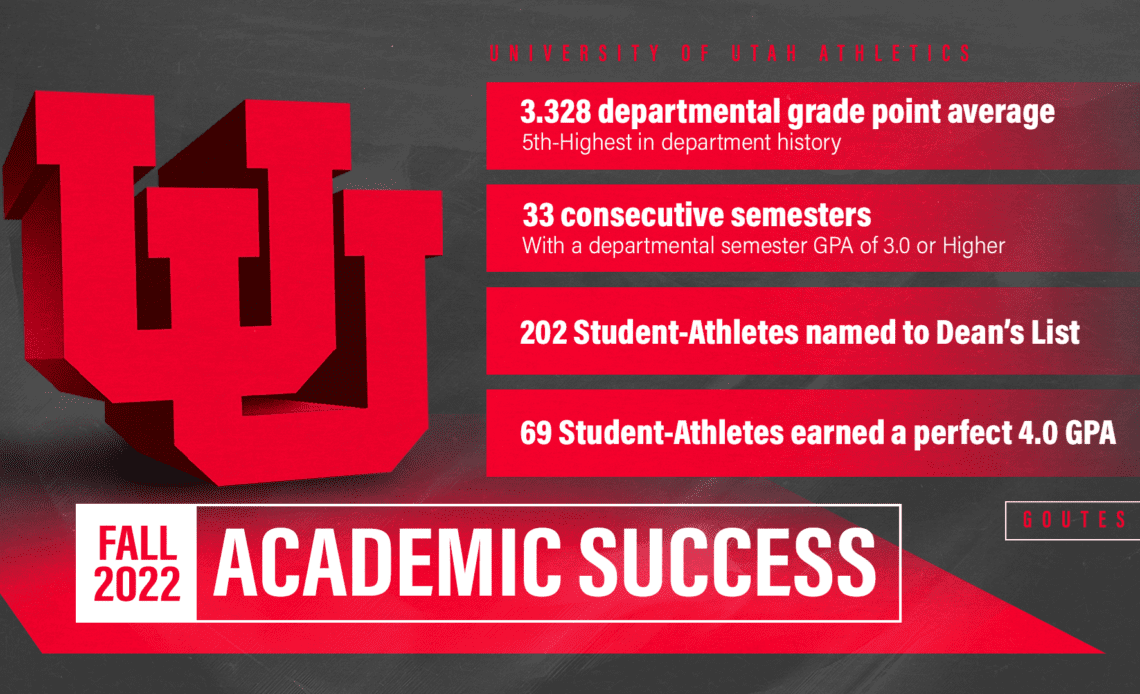 
SALT LAKE CITY – Utah’s student-athletes had another outstanding semester in the classroom this past fall, recording a 3.328 departmental grade point average, which is the fifth-highest all-time.

The 2022 Fall semester continued a stellar stretch of academic achievement for Ute student-athletes. The five highest departmental semester GPAs have come in the last six semesters, with the school-record 3.573 GPA coming in the Spring of 2020.

Utah Athletics has now achieved 33 consecutive semesters with a departmental GPA of 3.00 or higher. The national champion Utah Ski Team claimed the top team GPA for both the women’s and men’s athletics programs, with the women’s team posting the highest GPA of any team, at 3.794, and the men’s team leading on its side for the fifth semester in a row, at 3.537

“The academic performance of our student-athletes continues to be a tremendous source of pride for our department,” said Mark Harlan, Director of Athletics. “They are elite-level athletes, and also demonstrate in all facets of their experience as students at the University of Utah the same qualities in their commitment to succeed academically. I also want to thank and congratulate our coaches and academic staff, and our campus-wide partners, who commit themselves to supporting our student-athletes in all of their endeavors to build the foundation for this success.”

Utah’s record-setting GPAs have carried over to one of the best departmental graduation rates in the nation. According to the NCAA Graduation Success Rate (GSR) release this past December, 93 percent of student-athletes at the U graduated within six years of enrolling. It was the fifth consecutive year that Utah’s score has met or exceeded the 93-percent benchmark. Utah’s 93 percent rate is tied for the fourth-highest figure among Power Five public institutions and is tied for the sixth-highest score among all institutions at the Power Five level.

Twenty-eight student-athletes qualified to graduate following the Fall 2022 semester, while 20 enrolled in graduate studies during the term.