Records Fall for Track & Field at Day One of Vanderbilt Invitational 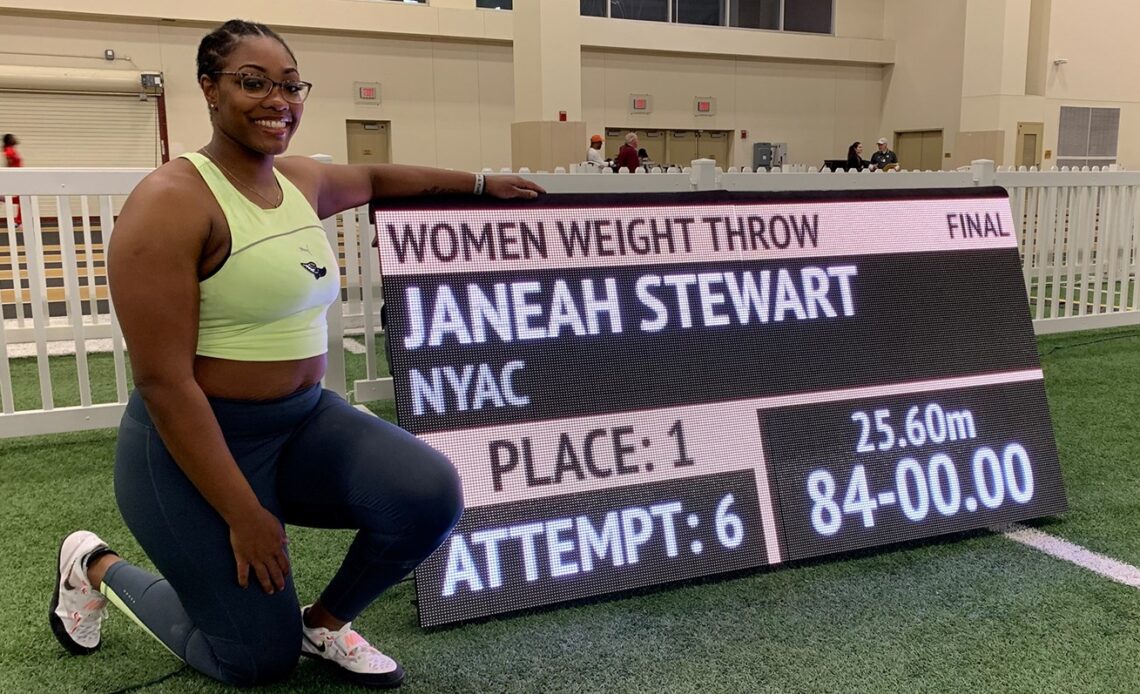 
NASHVILLE, Tenn. – A world record by a Rebel great and a third school record of the season led the way for Ole Miss track & field at a historic first day of the Vanderbilt Invitational on Friday.

Current volunteer coach and two-time U.S. weight throw champion Janeah Stewart – who ended a two-year career at Ole Miss in 2018 as a nine-time All-American and as the 2018 NCAA hammer champion outdoors – tied the world record in the women’s weight throw on Friday night on her final throw of the competition. Her mark exactly tied Gwen Berry’s 2017 record of 25.60m/84-0, and registered as a PR of more than a foot and a half.


The moniker of world record is unofficial, as World Athletics does not recognize the weight throw, but Stewart’s performance is now pending ratification by USA Track & Field as the American record.

Mitchell was the runner-up behind Stewart’s historic effort on Friday, tossing a season-best 24.06m/78-11.25 to improve upon her slot at No. 2 in the NCAA. Current NCAA leader, Jalani Davis, finished third not far behind at 23.98m/78-08.25. Also competing in the invitational section of the women’s weight throw was Tedreauna Britt, who finished ninth at 19.65m/64-05.75.

Over in the men’s weight throw, reigning SEC Freshman of the Week Tarik Robinson-O’Hagan won for the second time in as many meets to begin his collegiate career, today launching one 21.77m/71-05.25 to claim victory. Mason Hickel made the final as well, recording a PR of 19.08m/62-07.25 to improve upon his spot in No. 11 in Ole Miss history.

Senior Loral Winn opened her 2023 campaign in an identical way as she did the 2022 season: by breaking the Ole Miss record in the 1000-meter race at the Vanderbilt Invitational. Winn reset the record by eight seconds at Vanderbilt on Jan. 21 last year at 2:46.59, and tonight she outdid herself by three more seconds, finishing runner-up at 2:43.85. Other Rebel women making their…