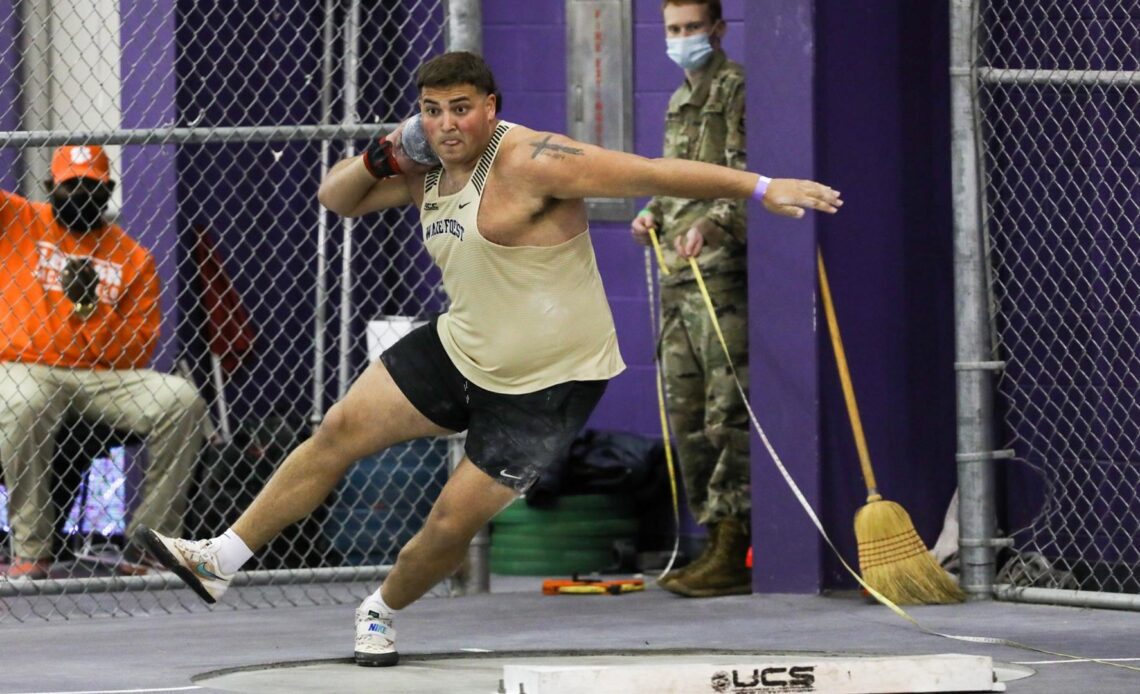 
COLUMBIA, S.C. – The Wake Forest men’s and women’s track & field teams continued their stellar 2023 campaign this weekend as the Demon Deacons posted a combined six top-three finishes between the two programs at the Carolina Challenge, hosted by South Carolina.

In the women’s shot put, Amanda Schaare (14.95m) and Ashlyn Giles (14.55m) finished second and third, respectively. Additionally, Casey Sullivan (13.43) finished sixth making Wake Forest the only team to have three throwers finish in the top six in the event.

The Demon Deacons also recorded two top-five finishes in the women’s long jump as Anna Bush (5.77m) and Robbie Grace (5.60m) finished fourth and fifth. Of note, Wake Forest joined Tennessee as the only teams to have two competitors finish in the top-five. Senior Emma Soderstrom also had an excellent day as she placed third in the high jump with a mark of 1.65m.

For the men, Wake Forest went first and second in the weight throw as White (21.08m) and Thomas Kitchell (18.48m) both had stellar outings. Of note, White’s distance marked the second best performance in school history. Additionally, in the men’s shot put, Kitchell finished second with a mark of 18.07m.

From the Staff
“Overall, for where we are in our training at this time of year, I thought the throws group had a good meet.
Andrew White had a small personal best in weight, which moves him a few centimeters away from the school record. Jacob Goldberg also had a personal best in the weight moving him up on the top 10 list. Mason Ellis had a personal best for indoors in the shot. Thomas Kitchell had a good first meet back after the winter break. All the women competed well and are ready for breakthroughs soon.” – associate head coach Collin Post

“We had some solid performances this weekend but also left a lot on the table. Ultimately, we are focused on being at our very best by the end of the season. These girls continue to work hard and compete everyday, so we are heading in the right direction.” – assistant coach Holly Hankenson

The Demon Deacons will return to action next weekend…