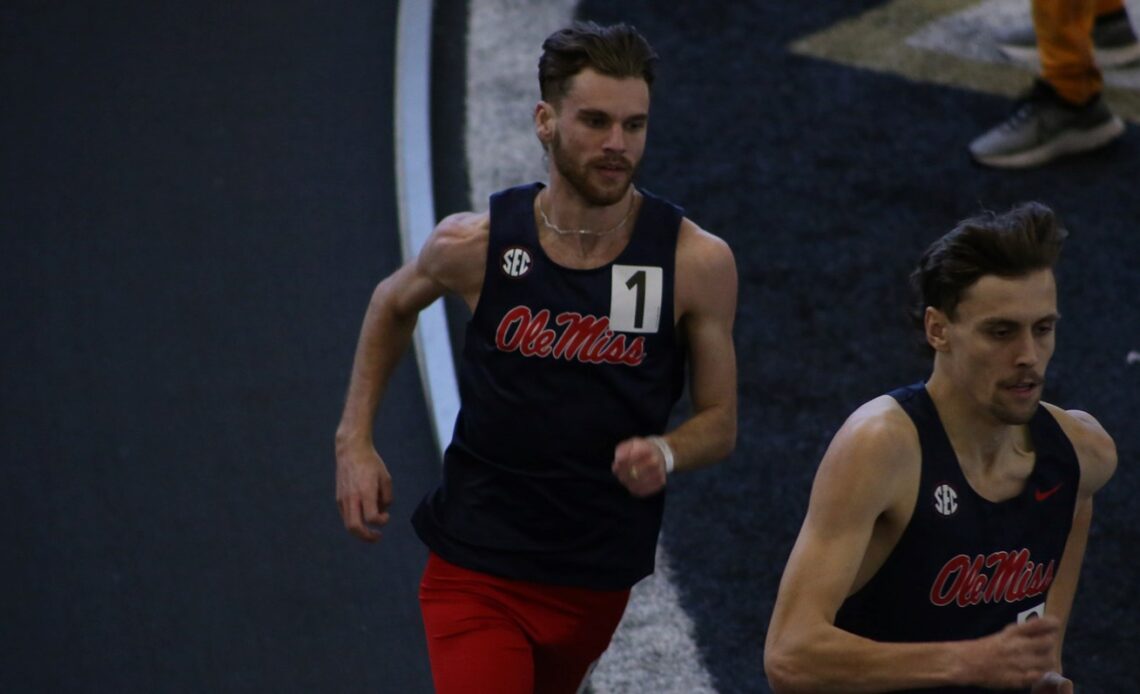 NASHVILLE, Tenn. – Ole Miss track & field freshman Tarik Robinson-O’Hagan took down another school record, while the Rebel distance squad had several impressive season debuts in the conclusion to the Vanderbilt Invitational on Saturday.

Robinson-O’Hagan – the reigning SEC Men’s Freshman of the Week – took aim this week at the Ole Miss indoor men’s shot put record one week after smashing the weight throw record. On his third attempt of the day, Robinson-O’Hagan let one fly 19.58m/64-3 – surpassing Brian Williams’ 2018 record of 19.24m/63-01.50 by more than a foot to become the first Rebel men’s thrower to break 64 feet indoors or outdoors.

This season, that throw puts Robinson-O’Hagan atop the SEC leaderboard and No. 6 in the NCAA, as well as ahead of all other NCAA freshmen by five feet. He is now only the third collegiate freshman to break 64 feet in the shot put since 2019, and combined with his weight throw record of 22.24m/72-11.75 from last week, he is the lone collegiate freshman to break 22 meters in the weight and 64 feet in the shot since at least 2013.

Elsewhere in the shot put, senior Daniel Viveros finished third at a season-best 18.46m/60-06.75 in the invitational section behind runner-up Robinson-O’Hagan, and in the open section Mason Hickel threw a PR 16.85m/55-03.50 to finish second and move to No. 8 in Ole Miss history.

In the women’s shot put, senior Jasmine Mitchell had a career day as well, winning by two feet at a big two-foot overall personal best 17.42m/57-2 – shooting her to the top of the SEC in addition to No. 3 in the NCAA and improving upon her spot in No. 4 all-time at Ole Miss indoors. This is the second week in a row with a career improvement for Mitchell, who opened her season at 16.77m/55-00.25 last week.

A decent portion of the Ole Miss distance squad opened their 2023 seasons at Vanderbilt this weekend, and the men’s middle distance runners had a particularly excellent season debut on Saturday.

All-American seniors Baylor Franklin and Tiarnan Crorken took to the track with a vengeance in the men’s 800-meter, setting the top two times in the NCAA this season. Franklin won at an indoor…