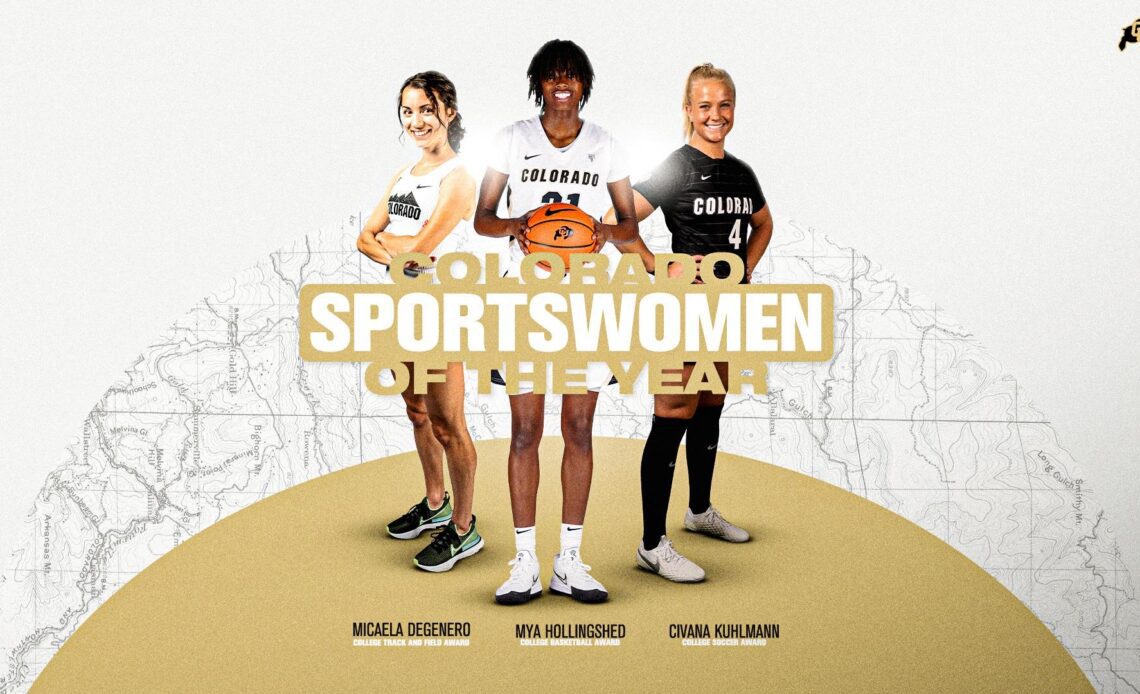 Mya Hollingshed (basketball), Micaela DeGenero (Track & Field) and Civana Kuhlmann (Soccer) each were selected as the Collegiate Sportswomen of Colorado for their respective sports.

The women, coaches and organizations are being recognized for their outstanding sports achievements during 2022. The honor is a true testament to their incredible talent and dedication.

Hollingshed earned her second WBCA honorable mention All-America selection, along with her Pac-12 All-Conference accolades in 2022. She averaged a double-double in CU’s three games in the 2022 Pac-12 Tournament and helped the Buffs to the NCAA Tournament for the first time since 2013. Hollingshed wrapped up her Colorado career by leading the Buffs in points (14.1), field goals made (5.2), 3-point field goals made (1.7), rebounding (7.4) and blocks (1.0) in 2021-22. She was the only player in the Pac-12 to lead her team in points, rebounds and 3-point field goals last season. At the conclusion of the season, Hollginshed was selected No. 8 overall in the WNBA Draft by the Las Vegas Aces.

DeGenero started off 2022 on the highest of notes, winning the NCAA Mile National Championship in 4:33.92. She was in last with 400 meters to go before blasting to the front and never looking back. Moving to outdoors, DeGenero won the 1,500-meter Pac-12 Championship and finished third in the 800-meter run just minutes later. She qualified for the NCAA Championship 1,500-meter finals where she finished second overall. DeGenero then raced in the USA Track and Field Championships in the 1,500-meter run, finishing 18th overall and just missing out on the finals. DeGenero finished her CU career being named a CoSIDA Academic All-American First Team member.

Kuhlmann returned to Colorado in 2022, transferring to the Buffaloes from Stanford. The Centennial, Colo., native posted career-highs in points (30), goals (12) and assists (6) in her lone season at CU. She led the team in all three categories and totaled two game-winning goals. Her 12 goals tied for the second-most in a season by a Buff, alongside Taylor Kornieck (2019), Jorian Baucom (2018) and Katie Griffin (2005). Kulmann’s 30 points finished…