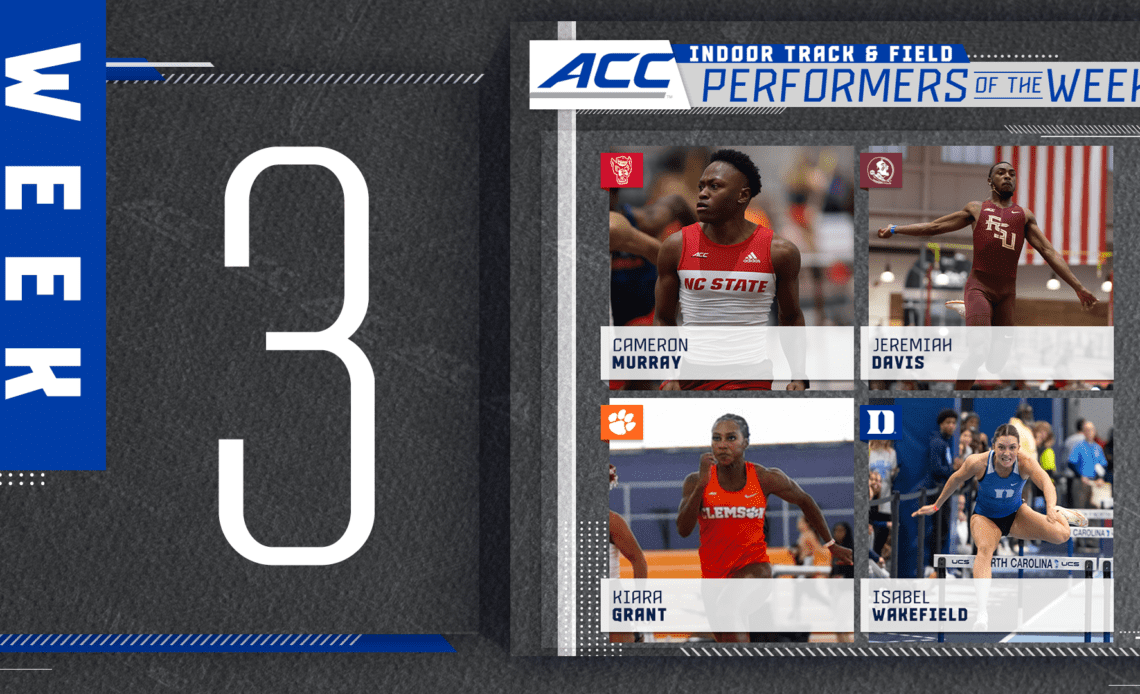 ACC Men’s Track Performer of the Week
Cameron Murray, NC State
Murray set an NC State school record and leads the nation following his winning time of 7.67 in the 60-meter hurdles at last weekend’s Hokie Invitational hosted by Virginia Tech. The graduate student from Atlanta led a field of 14 competitors.

ACC Men’s Field Performer of the Week
Jeremiah Davis, Florida State
One week after posting the nation’s top mark in the long jump, the Seminoles’ Davis ranks third in the triple jump following his winning mark of 16.44 meters (53-11.25) at the Vanderbilt Invitational. The Lehigh Acres, Florida native is currently the only Division I male athlete to rank among the nation’s top five in more than one event.

ACC Women’s Track Performer of the Week
Kiara Grant, Clemson
Grant ranks second in the nation following her ACC-record time of 7.09 (7.11 altitude adjusted) at the Red Raider Open hosted by Texas Tech. Grant led a field of 44 runners in topping the previous ACC mark of 7.15 that had stood since 2000. The Kingston, Jamaica, grad student has set a personal best in every meet so far this season.

ACC Women’s Field Performer of the Week
Isabel Wakefield, Duke
Wakefield ranks second nationally in the pentathlon after totaling 4,130 points at the Hoke Invitational. The grad student from England led a field of 14 competitors by placing first in the 60-meter hurdle and long jump, second in the shot put and finishing no lower than fifth in any event.