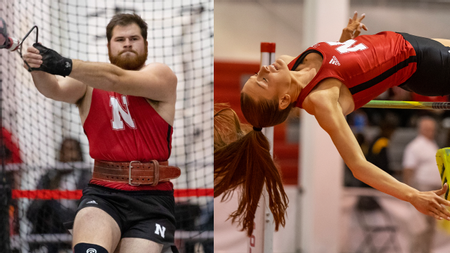 
The Nebraska track and field program swept the Big Ten Field Athlete of the Week honors on Wednesday.

Rogers won the high jump at the Mark Colligan Memorial, clearing a new indoor personal best of 6-1 1/4 (1.86m), which put her in a tie for fifth in school history. Rogers is tied for the Big Ten lead in the event and tied for second in the nation. The sophomore from Rutherford, N.J. collected her fourth career Big Ten Field Athlete of the Week honor .

Both Otterdahl and Rogers will compete for the Huskers at the Texas Tech Open & Multis this weekend in Lubbock, Texas.