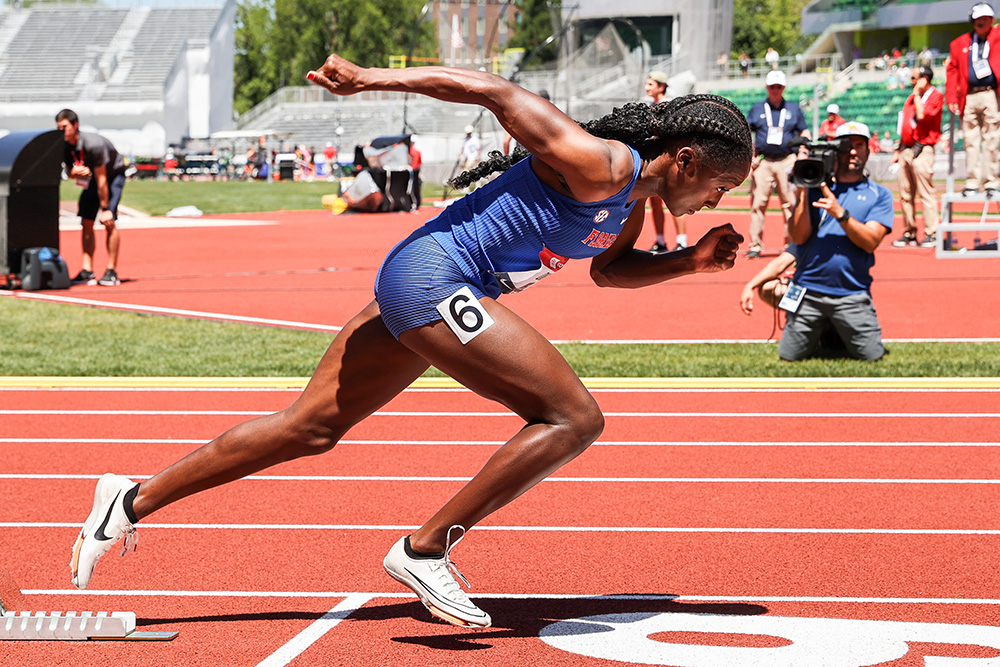 “WHEN YOU COME OUT with a bang in your first race, it’s really encouraging because it sets up the season really well, gives you some good momentum,” says Talitha Diggs of her season opener at Clemson, where she surprised with her sprint speed, winning the 60 in a lifetime best 7.14 after a PR 7.19 heat, then came back on day 2 to blast a 36.12 for the 300 (=No. 3 among collegians all-time).

“It also shows you’re in good condition, good shape, and fall training went really well and there were some things that coach did right. I think the rest of the country was surprised by that 60, but Coach Holloway was not, so it was definitely good.”

The Florida junior is back for another season with the NCAA champion Gator squad, amid plenty of indications that both boss Mike Holloway and his 400 star did a lot of things right. Last season could hardly have gone any better. Diggs — a teenager throughout the campaign (she turned 20 in late August) — won NCAA 400 crowns indoors and out, captured the USATF title, and then at the Worlds a few weeks later struck gold leading off the 4×4 after making it to the semis in the individual race.

Of course, for Diggs as well as her teammates, the highlight of the season was being part of an NCAA-winning squad, both indoors and out. And breaking 50 for the first time with her outdoor win (49.99) stands out to her as well. She adds, “Just winning that USA title was probably one of my favorite moments, because it showed I could measure up with the best in the country and the world on the senior level. It was definitely a good confidence booster.

“You know, Coach Holloway and all the coaches, we had all worked just so hard the whole year. Just to have USAs go my way and be able to make my first World team was just phenomenal.”

Not that the season was a non-stop victory parade. She points to the Tom Jones Memorial, where she placed 3rd in 51.93, then the SEC (4th in 51.24). “I didn’t run as fast as I would have liked to, and I think that I was just not in the best mental space for the time. I was just nervous; I wasn’t really anchored, I’d say that’s the best way to describe it.”

With the NCAA still a few weeks off, she says, “That gave me time to anchor myself, in my faith and keep pushing. Eventually the races started going better. But it really,…