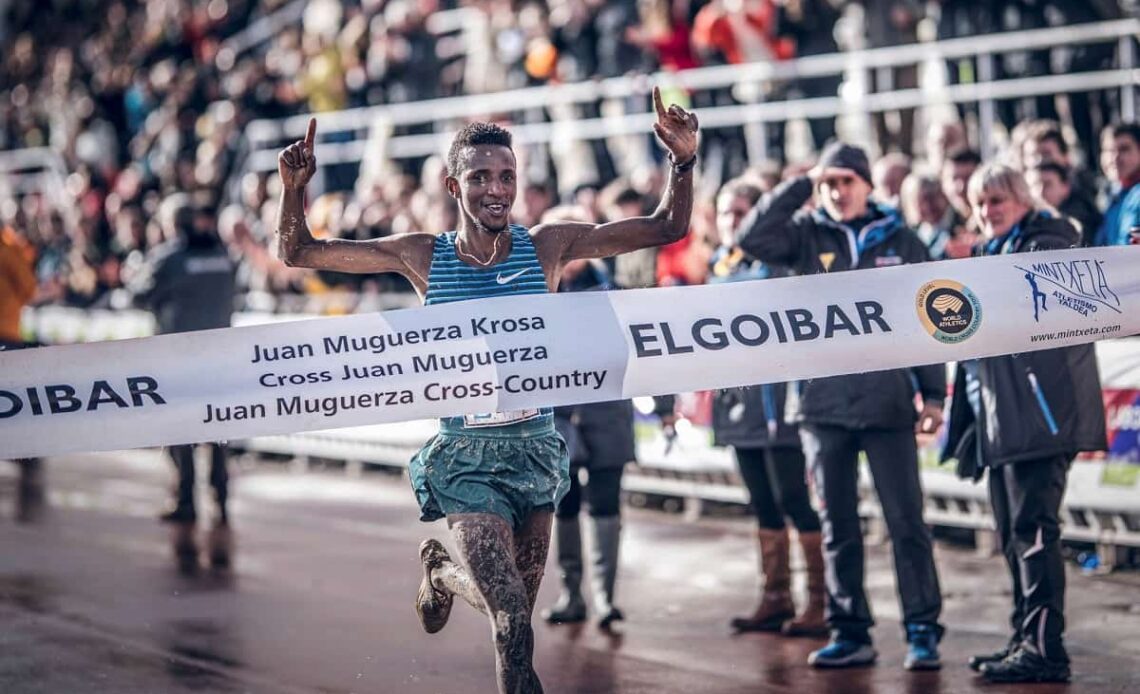 Eritrea’s Rahel Daniel and Olympic 10000 champion Selemon Barega clinched the win the 79th edition of the Cross Internacional Juan Muguerza in Elgoibar, a World Athletics Cross Country Tour Gold. The race was held on a cloudy day without rain.

Barega went to the lead for the first time during the penultimate lap. Only Balew and Aferdi were able to follow Barega. Mayo, Mechaal, and Las Heras began losing ground.

Barega stepped up the pace with 2500 meters to go and built a lead of seven seconds on Balew after clocking 6:20 in the penultimate lap. Balew had a lead of 16 seconds over Aferdi and Mechaal, who had managed to catch up with the Moroccan runner.

Barega increased his lead over Balew during the final lap and crossed the finish line in 33:14, beating Balew by 13 seconds. Mechaal pulled away from Aferdi to clinch third place in 33:39.

Barega won the Elgoibar race for the second time in his third appearance at this event. The Ethiopian athlete had previously claimed the Elgoibar race in 2018, beating Jacob Kiplimo and finished runner-up to Rhonex Kipruto in 2019. He finished fifth in the 10000 meters in Eugene before making his debut over the half marathon distance at the Great North Run in Newcastle last September when he finished fifth in 1:00:39. Barega finished seventh in his first cross-country race this season at Jan Meda race, which served as the Ethiopian Trials for the World Cross Country Championships in Bathurst.

“I am satisfied with my third podium in as many appearances in Elgoibar. It’s not sure, but I will skip the World Cross Country Championships in Bathurst, and I will run some indoor races instead: I will try to make the Ethiopian team compete in the 10000m at the World Championships in Budapest, but I have not ruled out trying a double in either the 5000m or the 1500m”, said Barega.

Balew will run the Noche de San Anton, a 10 km road race in the Spanish town of San Jaen.

The 7.6 km women’s race started at a slow pace. The leading group ran the opening 400 meters in 1:31. Six women ran in the front group after the first small lap.