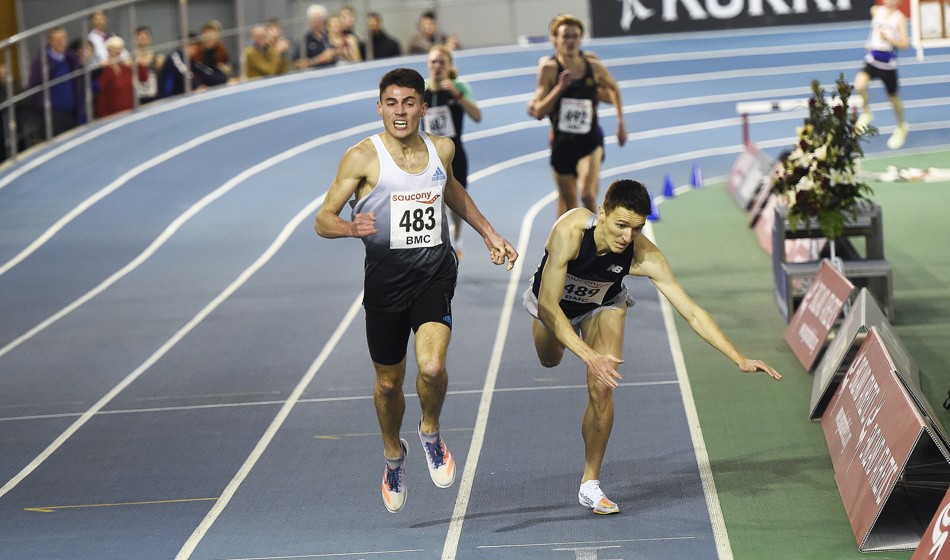 As well at the middle-distance races and combined events action in Sheffield’s EIS Centre, this results round-up includes news of Lynsey Sharp’s comeback race where she won a 600m in Glasgow.

The global gold medallist kicked hard at the bell and went four metres clear down the back straight on the final lap but his legs seem to give way in the straight and Sesemann’s acceleration took him past in the last five metres as the Scot tumbled across the line.

Wightman ran 7:50.97 for second place in the same race last year. On that occasion he was beaten by Ossama Meslek, but with Meslek currently training in South Africa it was left to another Leeds City runner, Sesemann, to deliver the victory.

“I wasn’t expecting to beat the world champion but I know training has been going quite well lately,” said Sesemann, who represented Britain over 3000m at the European Indoor Champs in Torun in 2021.

Wightman began the winter with a sprained ankle and then illness but spent a pre-Christmas stint altitude training in Flagstaff. Then, after returning to the UK, he ran the Dulwich parkrun in 14:52 on New Year’s Eve.

Wightman said: “I hadn’t done much prep for this as I’m going to South Africa tomorrow to get some track work done for the indoors, which is exactly the same prep as last year.

“With 200m to go I felt good but it was literally as I came into the home straight I just didn’t have it in my legs. I think three weeks’ time when I come back from this camp I will be stronger.”

Three other athletes were also inside eight minutes with Charlie Wheeler (7:57.06) and Tom Keen (7:57.53) setting PBs either side of teenager Osian Perrin’s 7:57.11. Keen is one of Wightman’s training partners and as he finished he accidentally stomped on the world champion’s leg as he lay on the track moments after falling over the finish line.

Phil Sesemann beats Jake Wightman in a dramatic 3000m at the BMC event in Sheffield. 🤯