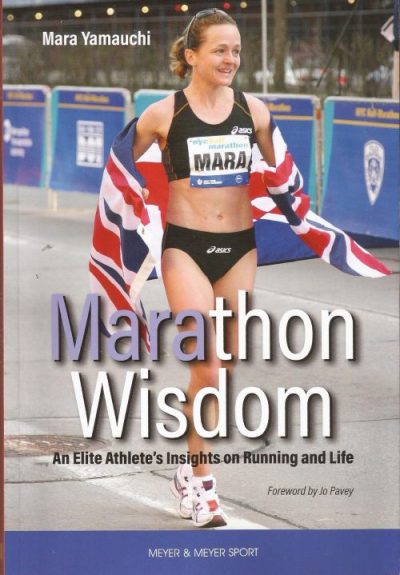 Mara Yamauchi finished second in the London Marathon in 2009 and was sixth in the Olympic marathon in 2008.  In addition, she finished sixth in London in 2007 and won the New York City half marathon in 2010.  She also took a bronze medal in the 2006 Commonwealth Games 10,000.  She now works as a coach and commentator.

I watched her London races and also the Beijing Olympics, speaking to her after the races.  Sadly I cannot find my notes from our interview in Beijing but she later described the race as follows:

“The aftermath of the 2008 Beijing Olympics was a mixed bag in terms of assessment of my performance.  My goal from the start had been simply to make the team and race in the Olympics.  This was enough; I had never set myself a gold in terms of time or place.  There for finishing sixth was way above my goal.  I should’ve been over the Moon and in some ways I was.  To think that I was the sixth-best marathon runner in the world was very satisfying.  However, several factors made me doubt myself.  I was agonizingly close to the medals – 22 seconds after nearly 2 ½ hours of running…  I wished I had run more aggressively but my experience that the previous summer’s world championships had knocked my confidence…  I left Beijing was a strange mixture of feelings.  The sense that others viewed it as an underwhelming performance left me feeling disappointed, even though I genuinely thought the sixth place was a result I could be proud of.  In a nutshell, I was too influenced by what others said and did which let me doubting my own belief that it was a good performance”.

After the 2009 London Marathon, where she finished second in 2:23.12 behind Irina Mikitenko (2:22.11), she told me: “I felt easy during the first half of the race but Irina kept putting in surges.  But even when she went ahead, I tried to stop myself from thinking it was over.  I hoped Irina might slow down but ultimately, I did not have the speed to catch her. I have to be satisfied to finish second in the London marathon and knock nearly 2 minutes of my best time.  Missing a medal in Beijing by 20 seconds, convinced me that I should be looking for a win in every race but when I saw the London field I wasn’t so sure”.

Mara has now written a book called Mara Yamauchi Marathon wisdom, subtitled “An elite athlete’s insights on running and life”.  The material is arranged into 42…