Perth glory! Megan and Jamie show their class across mud at Scone – and eye Australia chance 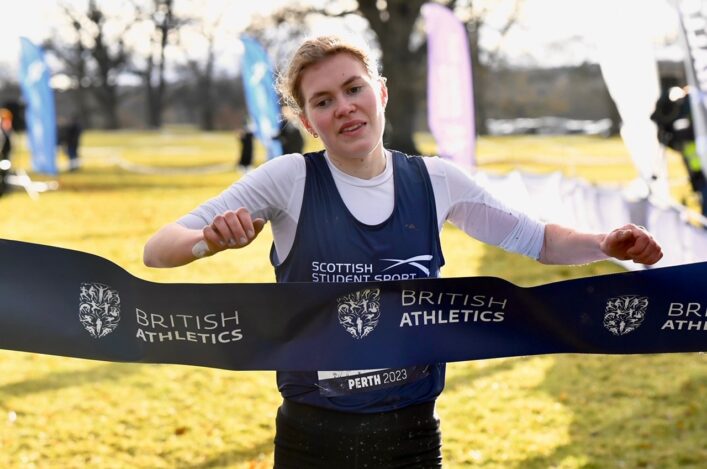 (NOTE: we plan to cover U17/U15/U13 races in separate story on here on Sunday. Thanks for your patience).

The strong winds cutting across the course at Scone Palace had turned a little icier just as Megan Keith expressed her hopes of a World Cross Country assignment in Australia.

Jamie Crowe wouldn’t be averse to a race opportunity Down Under, either, as British Athletics ponder selections for the World Cross in Bathhurst, New South Wales.

Keith and Crowe underlined their current status as the No 1 cross country exponents in Scotland with convincing victories in the British Cross Challenge and Scottish Inter-District XC in Perth.

It was a second Scottish title for Megan this season to follow on from the Short-Course while for Jamie, twice winner of the National XC at Falkirk, that’s three victories in three visits to Scone Palace (albeit one on the final leg of relay).

In truth the conditions overhead for almost the complete eight-race programme were as good as could have been hoped for in midwinter in Scotland – the sunshine lighting up the Palace backdrop for photographers.

Underfoot was a little different, the rain which swept the country for many travelling to and from the event on Saturday simply adding to recent wet conditions to deliver the proverbial mudbath.

There were only a limited number of English and Irish visitors in what was an open Cross Challenge event but it was nonetheless excellent to welcome larger fields that normal for our Scottish Inter-District races.

Keith always looked strong favourite as she followed up her Euro Cross U23 silver medal in fine style, winning in 28:58 over approx. 8k and with a 14-second victory margin.

GB international hill runners, and Irish international Fionnuala Ross, pursued with determination and were rewarded with podium places – as Scout Adkin (running as an individual for her club) took third.

GB international Alice Goodall, representing the East District, took third on the Inter-District podium headed by Megan for the Scottish Students and Fionnuala for the West.

In the Inter-District team race, there were golds medals for the East; silvers for the Students and bronze for the West.

‘It was a very hard race against the girls today,’ said Megan, who is coached by Ross Cairns.

‘The hills and the mud certainly made…