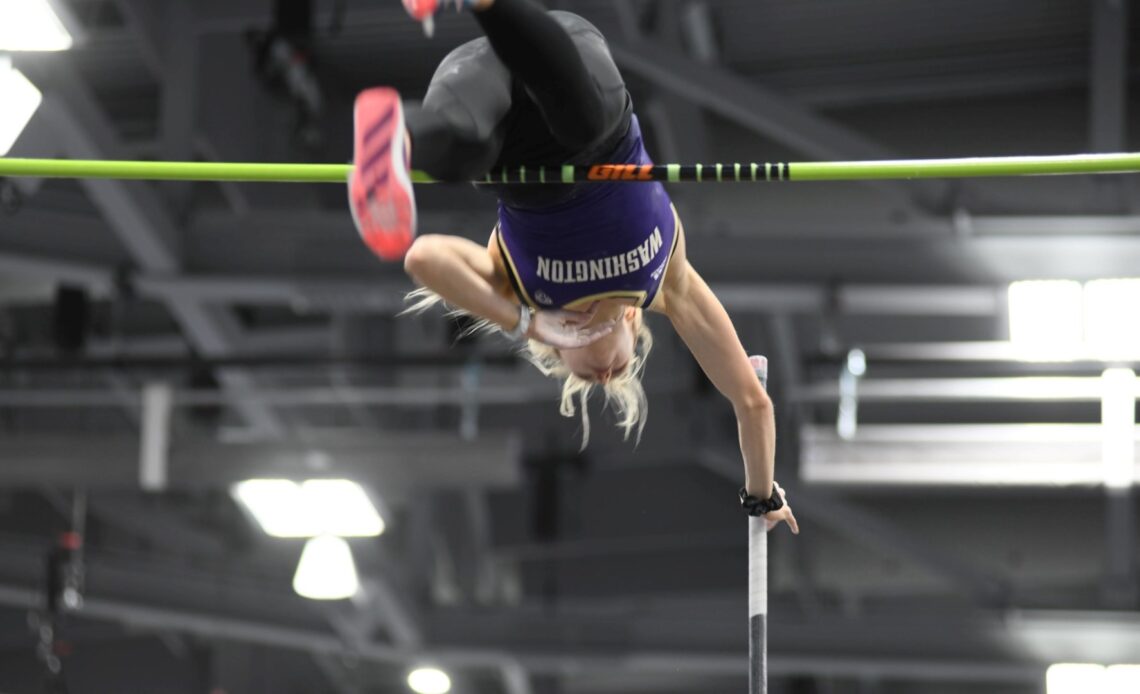 
SPOKANE, Wash. – Three new top-10 marks and a Freshman Record were turned in by a small group of Huskies that made a big early season impression at the Spokane Invitational today at The Podium indoor track.

Two of the top-10 marks were from Dawgs in their Husky debuts. Prestin Artis had the best indoor long jump by a Husky since 2013, and Sarah Ferguson broke the Freshman Record in the pole vault, both also taking the victories.

In the women’s vault, Ferguson, a freshman from Lexington, Ky. cleared 13-9 ¼ in her collegiate debut. That broke a freshman record that stood since 2012 of 13-8 ¼ held by Georgia Reynolds. It also tied for the No. 6 mark in UW indoor history.

UW freshmen went 1-2 in the vault, as Ferguson may have to battle her teammate over the freshman record this season. Avril Wilson, from Duvall, Wash., cleared a PR of 13-5 ¼ to take second today.

Sophomore Anthony Smith smashed his indoor PR with a victory in the 200-meters, running a time of 21.28 to move up No. 5 in school history. It’s the best time by a Husky since 2009.

Three more Dawgs had strong starts in the 400-meters. Matthew Wilkinson was second overall in a time of 48.67, new Dawg Daniel Gaik was fifth in 48.83, and Sam Baricevic was eighth in 49.39.

Another win came from senior Cass Elliott, as the Pac-12 hurdles champ moved back up to the 800-meters and won by nearly two seconds in a time of 1:50.82.

The sprinters closed out the day with another win, and broke the facility record in the process, taking the 4×4 relay in 3:11.67. The group was comprised of Elliott, Wilkinson, Gaik, and Smith.

All-American decathlete Ollie Thorner opened his indoor season, as did freshman Bruno Comin Pescador. In the 60m hurdles, Pescador clocked a time of 8.66 and Thorner ran 8.73. Thorner went 21-10 in the long jump while Pescador jumped a 22-0 ¼. Thorner also cleared 6-2 ¾.

Camille Duckett had a long jump best of 17-4 ¼ to open her season, and freshman Anna Terrell made her debut in the sprints, going 25.68 in the 200-meters.